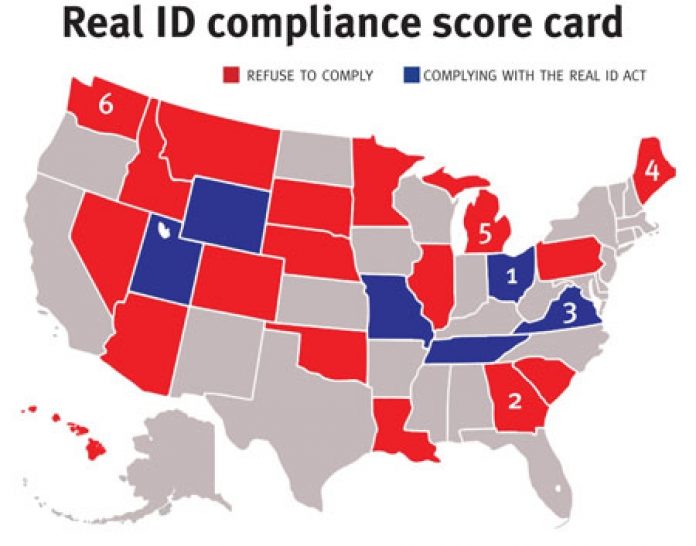 Guam has until Jan. 2018 to make Guam driver’s licenses compliant with the Real I.D. act.

DHS Extends Timeline for Compliance with the Real ID Act

Washington, D.C. – Congresswoman Madeleine Z. Bordallo today issued the following statement regarding the Department of Homeland Security’s extension for fully implementing the Real ID Act. In a statement issued by DHS Secretary Jeh Johnson, states and territories have until at January 22, 2018 to come into compliance with the law in order for their driver’s licenses to be accepted by the Transportation Security Administration for domestic air travel. Congresswoman Bordallo wrote to Secretary Johnson to request areas where the Guam driver’s licenses were not in compliance with the law and what more needed to be done to bring our licenses into compliance.

The timeline for implementation of the final phase of the Real ID Act is:

·         Effective immediately, the Department of Homeland Security will conduct outreach to educate the traveling public about the timeline below, and continue engagements with states to encourage compliance with REAL ID standards.

·         Starting July 15, 2016, TSA, in coordination with airlines and airport stakeholders, will begin to issue web-based advisories and notifications to the traveling public.

·         Starting December 15, 2016, TSA will expand outreach at its airport checkpoints through signage, handouts, and other methods.

·         Starting October 1, 2020, every air traveler will need a REAL ID-compliant license, or another acceptable form of identification, for domestic air travel.

“I am pleased that the Department of Homeland Security has given states and territories additional time to come into full compliance with the Real ID Act. I was concerned that Guam residents would no longer be able to use their driver’s licenses when traveling domestically.  However, the revised timeline provided by DHS gives Guam Rev and Tax additional time to modify Guam driver’s licenses to conform to the necessary security requirements. I will continue to work with DHS and Rev and Tax to provide any support needed to ensure that our people are not adversely impacted when the law is fully implemented in 2020.”