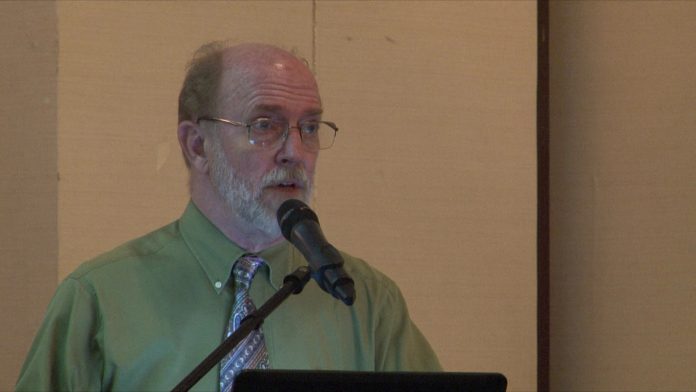 Bank of Guam’s Chief Economist Joseph Bradley talked about how the Japan economy has affected tourism numbers on Guam.

Guam – World economies and how it affects Guam was the topic of discussion today at an Association of Government Accountants meeting. Bank of Guam’s Chief Economist Joseph Bradley was the guest speaker. Two topics that were covered were Japan and oil prices.

It’s been well known for years that tourist arrivals are on the rise and even breaking records on Guam, but the one visitor arrivals from Japan, the one country the island relied most heavily on for decades is on the decline. Bank of Guam’s Chief Economist Joseph Bradley says this should not be surprising as the entire country’s economy is also on the decline.

“Employment is relatively stagnant. Unemployment is still low. But Japan’s facing another problem–their population is aging … but they’re not replenishing their population like most places are and so they’ve got a shrinking labor force. We can expect their gross domestic product to continue to decline,” notes Bradley.

Bradley says there was a time when the Yen was strong that Japan began investing heavily in the United States, including building hotels in Guam. But Bradley says Japan slowly stopped investing in the US, even as the Yen grew stronger.

“They’re not doing that very much anymore and. They didn’t do that when the yen increased to 78 yen to the dollar, 77 yen to the dollar, as high as 75 yen to the dollar. But now they’ve taken an active policy to expand their money supply quickly, drive down the value of the yen, hoping to build exports in the process. And they did it just in time for the world to go into recession,” he points out.

Another problem in the Japan economy, says Bradley, is deflation. In the US we’re all very familiar with inflation. In Japan, it’s the exact opposite.

“This has been Japan’s real problem since 1991. They’ve been fighting deflation, which is a real policy nightmare for economists. It’s very easy to slow an economy down; it’s very easy to build up an economy’s speed. But if prices are falling then why would I buy that new car today when I can buy it for less a month from now,” he says/

Meanwhile, Bradley says the recent nuclear deal lifting sanctions in Iran has not only had an impact globally, but in Guam as well.

“Lifting sanctions against Iran may help keep oil prices down and oil prices are way down. Prices are falling by more than two-thirds here too, right? Mmmmm no,” he says. “But one way or another this is very good for us. We import almost everything so shipping rates have gone down. But lower gas prices gives us more money to spend on other things. It costs a lot less or it should cost a lot less for tourists to fly to our sunny shores. That’s good for us and we’ve been seeing our visitor arrivals go up.”