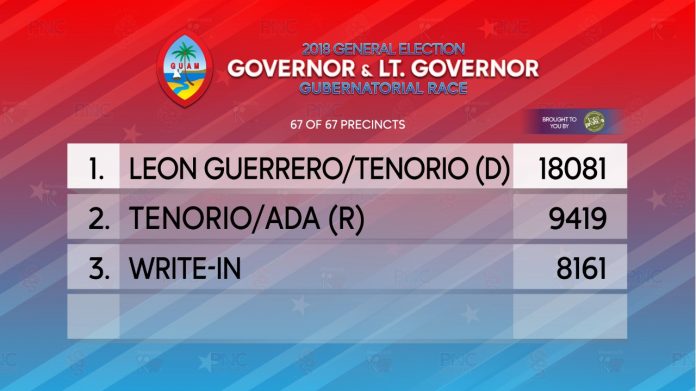 Guam – A much more feminine and democratic dress-up for GovGuam is expected this time around, with the island’s first-ever female governor Lou Leon Guerrero, a female caucus in the legislature to be led by Vice Speaker Therese Terlaje and the judiciary to fall under the purview of Supreme Court Justice Katherine Maraman.

History was made by voters of Guam today, following the results of this year’s General Election.

A colossal lead was maintained by the democratic party of Guam in the race toward Adelup since the first set of tabulated results were released last night.

Just after 7 o’clock this morning, that lead became solidified with the final uncertified results of the gubernatorial race leaving nearly a 50% gap between democratic banner bearers Lou Leon Guerrero and Josh Tenorio and the uncontested republican ticket holders Ray Tenorio and Tony Ada.

On NewsTalk K57’s Mornings with Patty, Guam’s first-ever female to sit atop Adelup shares her excitement and optimism of not just the female majority in the legislature, but also, the victory of democrats in all 3 branches of government to include a member of her party to now sit in Washington.

Leon Guerrero states, “I’m just so excited about that and, you know, I am looking forward to working very closely with the legislature and certainly we will see good social policies coming out. We’ll see a lot of policies that provide for the health, safety and education of our people.” She then expresses her confidence in better communication between the executive and legislative branches.

However, the optimism of an improved relationship between the two branches is not an aspiration held by Leon Guerrero alone. Also on Morning’s with Patti, Vice Speaker and reelected incumbent Senator Therese Terlaje could barely contain her excitement and her gratitude toward voters.

Having maintained the top-most rank since the start of the race and never looking back, Acting Speaker Terlaje reiterates such excitement with the newly elected batch of island leaders.

She states, “I’m very excited, you know, that Lou’s coming in. I feel like the people that came into the legislature, I’m very excited by that. They are a good strong team on both sides, male and female, all of them. We are gonna have a great team I think.”

Terlaje then adds that this will be a fairly new set of senators to sit in the Mina’ Trentai Sinko na Lehislaturan Guahan. The current make up, as of this morning consists of 2 term Senator Mary Torres going into her 3rd, followed by 7 familiar names in the legislature to include herself who will go into their 2nd terms and 6 newly elected first-timers.

This relatively fresh set of perspectives is what the Vice Speaker says provides a great deal of opportunities to revamp the legislature. She hopes that with a brand-new team, senators would be able to act more openly with the public and with government agencies as well.

A great deal of optimism is seen from the 2 leading ladies in both the executive and legislative branches.

You may listen to both interviews in full, on K57.com

Damian released on $50,000 bail, placed under house arrest with electronic...