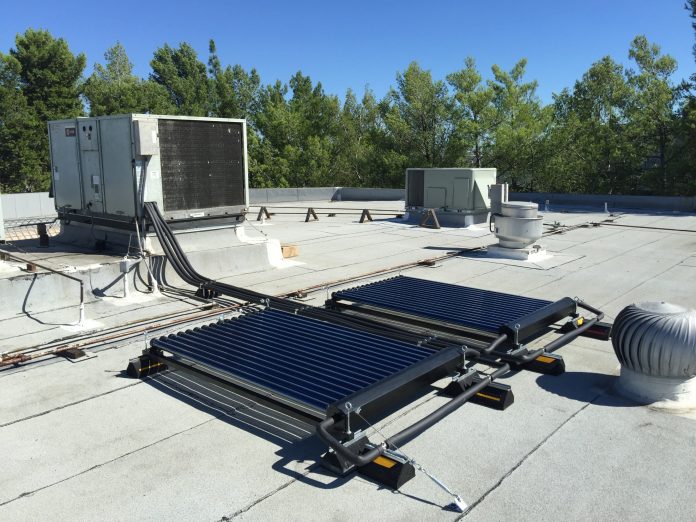 According to a press release from GESI, SolX, a UK-based company, has some of the most energy efficient air conditioning and refrigeration systems in the world.

Members of GESI tested the competency of the SolX products by measuring the energy consumption produced by the 17 Fujitsu air conditioning units on each of the leased spaces at the Ada Plaza building last September.

GESI then replaced the Fujitsu units with ones from SolX and found that the spaces’ energy consumption was significantly reduced. Lynn Scott, GESI’s chief of operations, explained why these findings were important.

“When you think about it, most commercial buildings’ biggest cost is air conditioning – not counting employees, but building-wise,” Scott said. “So if we’re able to reduce energy consumption by 43 percent, their power bills will be drop dramatically.  What we’ve seen so far is somewhere between 35 and 40 percent in overall reduction just by helping out their air conditioners.”

“It doesn’t need any type of electricity. It’s all refrigeration,” Bustamante said. “And believe it or not, these glass tubes are vacuum-insulated, so it doesn’t even need the heat from the sun. It just needs the light. It can be an overcast day and it can still work. That’s the beautiful part about it. It just needs the light, the light creates the heat, the light creates the heat under the bulb – which is the blue film you see – and that’s what heats up the refrigerant. That’s pretty much all it is.”

According to Lynch, the SolX products are currently available only for commercial use. GESI is negotiating with SolX Energy to begin manufacturing a smaller system that would be suitable for residential customers, which is expected to be available in the market by the end of the year.