Administrator Elizabeth Cruz says she’s getting the paperwork done for 2 grants under the American Recovery and Reinvestment Act (ARRA) before the end of September. One grant is worth $19 million dollars, while the other is about $5 million. The funding centers on renewable and alternative sources of energy, as well as conservation efforts in public facilities.

“There’s quite a few things about retrofitting public facilities and stuff like that and so that’s probably my next piece out” said Cruz.

Cruz also says the last few weeks in her new position have been positive and she’s still listening to her staff on how to help make Guam EPA run more efficiently. 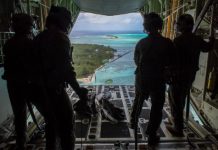 Orote Commissary to restore one hour to shopping operations

November 25, 2020
@PNCGUAM INSTAGRAM
The Port Authority of Guam held a tribute in honor

The Guam Election Commission may have uncovered ca

To date, there have been a total of 6,655 official