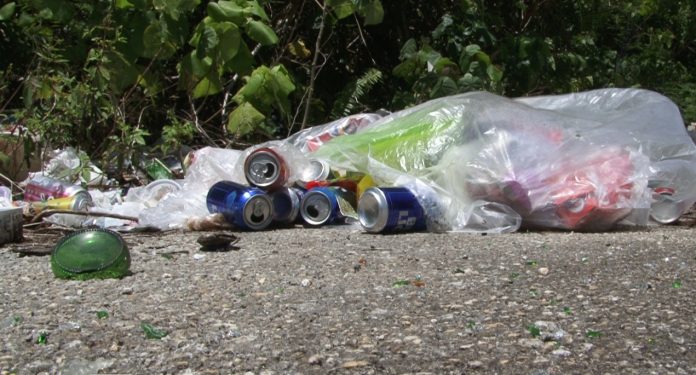 The Guam EPA EHS Officer Glenn San Nicolas says The agency has located a potential violator for an illegal dumpsite near a GWA pump station in Yigo.

Guam – There a total of 151 known illegal dump sites on island, as confirmed by the Guam environmental protection agency. After locating multiple dumpsites, PNC spoke with the Yigo mayor who proposed an idea to cut illegal dumping drastically.

Yigo Mayor Rudy Matanane resides over one of the most populated villages on Guam. Since he’s been mayor, he says he’s seen a rise in illegal dumpsites in his village. Based on resident concern, PNC located two dumpsites in Yigo. One site is located on the back road to Anderson and the other near a GWA pump station. So what is yigo doing to clean the sites? Matanane proposes an idea to investigate houses without visible trash bins…

“There are a lot of things that need to be done before we start doing this and a lot of it is the legality of going around and questioning people. And the questions that you ask are: if there is no trash bin in your front yard, then the trash better be in your backyard. If it’s not in your backyard and you don’t have a trash bin or a receipt then that trash is going somewhere else,” said Matanane.

Matanane says he’s discussed this idea with Mayors Council Executive Director Angel Sablan, who agreed with him, but he says he needs to get the mayors on board to make this an island wide initiative.

According to Matanane, there has been a rise in illegal dumpsites since he’s become mayor.  He points to the closure of the Dededo transfer station on June 30,, 2015, even though he was involved in the decision to shut it down.

“Oh yes, I saw the difference in the dumping after the closure of the Dededo dumpsite,” said Matanane.  “All those sites were already known when I came in, but they revitalized the dumping in those sites when the transfer station was closed, there’s no excuse for that, but you need money to drop those trash and you know people don’t have that money.”

The Dededo transfer station was closed down at the request of Gov Guam to help save money for post-closure of the ordot dump. At the time northern residents expressed disappointment at the closure of what was once the largest transfer station on Guam.  Matanane says shutting down the transfer station and forcing residents from two of the most populous villages on island to travel to the traffic heavy Harmon area has prevented residents from making the trip to properly dispose of their trash.

Currently, San Nicolas says GEPA has found a violator for one of the dumpsites in Yigo.