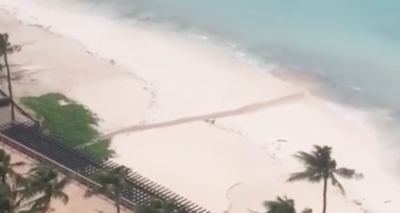 The video, posted online, shows what appears to be the illegal dumping of storm water runoff into the Tumon Bay–a popular tourist destination for its pristine beaches.

Guam – The Department of Agriculture has been called in to investigate the illegal dumping of storm water runoff into the Tumon Bay Preserve yesterday. It was first discovered after a video was posted online of what appeared to be workers pumping storm water into the oceanfront of the newly opened Dusit Thani Hotel.

“I personally went down alongside my chief engineer and by the time I got there all pumping had ceased. right now Guam EPA is actively looking into the situation,” Cruz announced.

Cruz could not release much details but she did say that she spoke with a representative about the situation.

“Right now what I can tell you is there was a contractor that I spoke with … they were taking emergency measures to mitigate an issue that they saw. By the time I got there, like I said, the pumping had ceased and we advised them to use the existing storm water drainage along San Vitores,” Cruz explained.

Meanwhile, Cruz says she hopes to have their initial investigation completed sometime this week.

“What we’re determining is whether or not any wrongdoing was done in the discharge. From the looks of it, it looks terrible but we have to go through the process before I can confirm anything,” noted Cruz.

Dusit Thani Guam Resort released a statement regarding the matter today. You can read the statement from Dusit Thani General Manager Dean Huntsman below.

“Dusit Thani Guam Resort is fully committed to operating an environmentally friendly hotel. The storm water system was clearly overwhelmed throughout all of Tumon from Tropical Storm Chan-Hom and flash flooding over the weekend. In an effort to mitigate the flooding, the hotel contractor followed the Guam Environmental Protection Agency approved storm water drainage plan and re-directed the water into the storm water system not directly to the beach. The contractor met with Guam Environmental Protection Agency officials on Sunday and again this morning. Dusit Thani Guam Resort is a proponent of environmentally responsible tourism and will work with Guam EPA and our contractor to ensure the Tumon Bay Preserve is protected for the enjoyment of tourists and residents alike.”