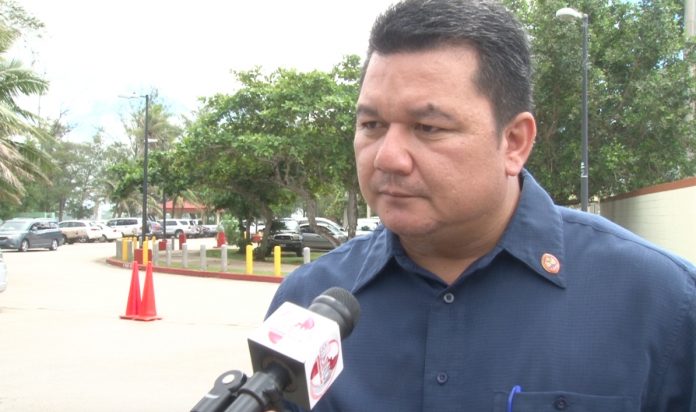 Guam – The Guam EPA is still unsure of the Environmental impact the explosions at Cabras 3&4 might have caused.

The explosion at Cabras 3&4 early Monday morning has caused a residual spill that has leaked into the surrounding waters. Shortly after the explosion, the US Coast Guard sent out a press release saying that a quote oily waste’ was discharged from the explosion site and spilled into the water. We talked with Guam EPA Administrator Eric Palacios. One of the concerns when dealing with any type of material spilling into a marine area is whether or not the ecosystem has been affected.

“What is very concerning in that it would be detrimental to marine life, it would be detrimental to…even on land and potentially any ground water source that might be in the area, fortunately response was pretty swift and I know that everyone is trying to contain the spill and begin the cleanup and continue cleaning up as expeditiously as possible to further minimize any negative impact,” said Palacios

According to Palacios, the Guam EPA was called to the scene to make sure GPA, who is considered the responsible party to the spill, to make sure that GPA and/or its contractors is performing the work the right way and that there is zero contamination when everything is done. Palacios says that the Guam EPA was a first responder to the scene of the spill and immediately began work to assess the damage.

In terms of testing the water, then and now, Palacios says the Guam EPA is not setup to handle the substance that spilled into the water.

“I don’t know whether eh coast guard has done anything on its side, we have not and that’s primarily because our lab isn’t setup to test for petroleum based products, however, with the contractor in place we cam direct the contractor to collect samples and cause for the analyzing for those samples, we do believe it to be some type of petroleum based products,” said Palacios

According to GPA, part of the procurement services for the contract to the company who is cleaning up the spill includes collecting of samples and analyzing.  Once the final samples are analyzed, the results will sent back to all agencies involved, including the Guam EPA. In terms of a potential citation to GPA, Palacios says its too early to tell…

“I think right now it’s still premature to adequately comment on that, only because I don’t think GFD has been able to officially begin their investigation into the explosion, pending that I cant say whether or not we will issue some type of violation down the road. I will say that if it is warranted, fortunately no one got hurt, but if an NOV is warranted, that’s something well definitely consider, “ said Palacios

The explosion, which occurred early Monday afternoon, resulted in a spill of a substance into the surrounding waters. One worker said the initial cleanup right after the explosion produced 15 plastic bags of the substance just in one area of the spill. With the main body of water practically clear, efforts have shifted to a retention pond directly outside of Cabras 3&4, the site of the explosion.