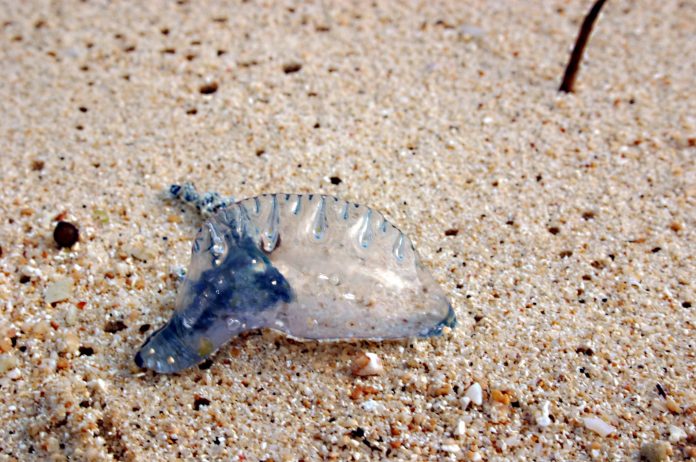 Guam – The Guam Enviromental Protection Agency is asking residents and tourists to bee on the look out for Pacific Man-Of-War on all beaches. If touched, the man-of-war stings can be painful.


Read the Release from the Guam EPA BELOW.

December 28, 2012 – The Guam Environmental Protection Agency, in partnership with biologists from the Guam Department of Agriculture, are encouraging residents to be on the lookout for Pacific Man o’ War this weekend on all beaches.

Man of War can be identified by a floating blue bubble with blue tentacles. Tentacles can reach six feet or longer. Man o’ War are dangerous when floating in the water or washed on shore. There have been several reports of Man o’ War in Guam’s waters during the past 24 hours.
Residents are reminded never to touch these animals as their sting can be very painful, even after the animal has perished.
Anyone stung by a Man of War should rinse the area with large amounts of water, not vinegar, and try to remove as many tentacles as possible using a stick, credit card or other flat object. If the sting is severe, or the victim has an allergic type reaction, residents are encouraged to seem medical attention immediately.

“These animals are passive but can cause a very painful sting. They are drifters and go wherever the wind blows them,” said Guam Department of Agriculture biologist Brent Tibbatts. “They can easily be pushed toward our shores with steady onshore winds. During this type of weather pattern we can see them show up in large numbers. This year we have seen them several time in different locations around the island.”