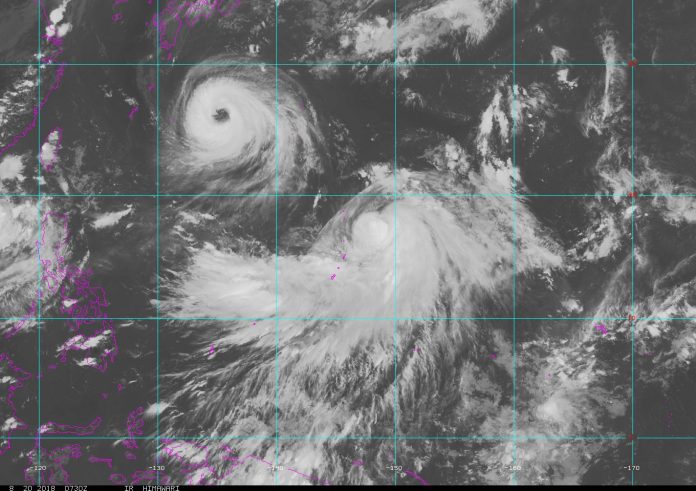 Guam – Another round of intense weather patterns for this week is anticipated as yet another tropical storm approaches our region. However, the bulk of it is set to affect the northern-most islands.

Tropical Storm Cimaron is on track northwest ward, concentrated mostly in the northern-most islands of the Mariana Island chain. A tropical storm warning in effect for Saipan and Tinian with damaging winds of 39 to 73 mph is anticipated within the next 6 to 12 hours.

This, however, does mean that for Rota and Guam – heavy rainfall, thunderstorms, and intense surf are what we must prepare for.

Ken Kleeschultee from the NWS tells K57’s Patti Arroyo this morning: “We’re gonna get some gusty winds. We’re gonna be seeing some heavy showers throughout the day, mainly some light to moderate rain.”

The gusty winds Kleeschultee speaks of are as high as 40 mph, but this does not mean it’s that intense for all areas and such speeds have since dissipated coming in between 20 to 25 mph with gusts as high as 30 mph.

“Currently, Tropical Storm Cimaron, it’s up to the Northeast of Guam. It’s actually heading toward the Northern CNMI islands. The closes point it will get to is Agrihan Island way up north. That is pulling all the moisture and showers into it. It’s dragging right now across the Marianas.

Because of all the rain and wind we are looking at throughout the first part of this week, a flash flood watch and a small craft advisory have both been issued for the entire region which may be lifted by Tuesday night at 10 p.m. but only if it begins to calm down. In addition, advisories for high surf and high risk of rip currents have also been initiated.

“It’s gonna continue to increase. We are looking at up to around 11 ft,” said Kleeschultee. “You don’t wanna get too close because more or less we say 11 ft., that’s more of the average height. You could get a wave that comes in much higher.”

So avoid venturing onto the beach, into open water, or onto reef flats as this weather persists and as surf remain hazardous at least through Wednesday.