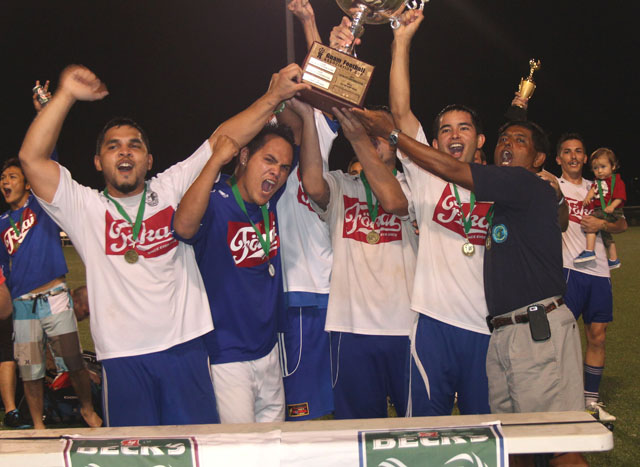 Guam – And the show will go on.

The highly anticipated annual soccer tournament, the Guam FA Cup, was on the brink of cancellation for 2013, but thanks to the sponsorship of Bank of Guam and Table 35 Restaurant and Bar, the event will go on as planned beginning Saturday.

“As a player, I’m definitely excited that we’ll be able to compete in the Guam FA Cup this year,” said Brett Maluwelmeng, goalkeeper for Quality Distributors FC. “Quality’s been in the final every year, and it would have been disappointing if we weren’t able to compete this year. Last year, we lost in the finals after being just seven minutes away from winning it all. The team is hoping to win the Cup back this year.

“Bank of Guam has always been a strong supporter of Guam Football Association and on behalf of all the teams, I’d really like to thank them for sponsoring the tournament. Also, with Table 35 coming in at the last minute as an additional sponsor, it surely helped make the tournament happen,” Maluwelmeng added.

Quality will play in the tournament’s first match against FC Shotguns at 5 p.m. Saturday at the GFA lower turf pitch. The Paintco Strykers will face the Pago Bay Disasters in the evening’s later game, beginning at 7 p.m.

The tournament will span about a month, with matches played on Saturday and Sunday evenings and some games on selected Thursday evenings. A total of 18 teams will be vying for the Cup this year. The draw is posted on the GFA bulletin board, as well as online at GuamFootball.com under Downloadable Items.

The top four teams from Division I of the Budweiser Soccer League are ranked in the tournament. Quality finished first in the league, followed by Guam Shipyard, Table 35 Espada FC and the Southern Cobras. The championship game of the 6th Annual Guam FA Cup, presented by Bank of Guam and Table 35 Restaurant and Bar, is scheduled for 7 p.m. June 15.

The women’s edition of the tournament will be postponed until later in the year, according to Grace Martinez, GFA Women’s Administrator.

There is no admission fee to watch the games.