Guam – The quarterfinal matchups of the 6th Annual Guam FA Cup presented by Bank of Guam and Table 35 Restaurant and Bar are set with the conclusion of Week 2 games of the tournament.

Defending champion Guam Shipyard had no difficulty advancing as Round of 16 opponents United FC Vipers were forced to forfeit due to a shortage of players at kick off time. Guam Shipyard is set to face the Ambassadors 5 p.m. Sunday. The Ambassadors eliminated Xtra Krispy FC 13-2 in the Round of 16 to move along in the bracket. The Ambassadors’ Mohammed Sahid, who currently leads the tournament in goals scored, powered in five goals for the winning team and teammate Jeremy Hewitt finished with a hat trick. Nick Cabuhat scored twice and teammates Thomas Flores, Joshua Cepeda and Ryan Ledger each contributed a goal.

The Southern Cobras notched their place in the quarterfinals after soundly defeating BSL Division II winners Rovers FC 7-1. Sydney Talledo put the Cobras up 1-0 after beating left side defenders to the goal for the early advantage. Less than 10 minutes later, the Rovers knotted the match when Gary White launched a free kick from the left side to the opposite post out of Cobras goalkeeper Jonathan Reyes’ reach.

[The Rovers FC’s Jonah Sablan and the Southern Cobras’ Aaron Cruz fight for possession of the ball in a match of the 2013 Guam FA Cup presented by Bank of Guam and Table 35 Restaurant and Bar at the Guam Football Association National Training Center. The Cobras defeated the Rovers 7-1 to advance to the quarterfinals.]

The Rovers had an opportunity to take the lead moments later after a Cobras foul in the box set up a penalty kick. Natsuki Recella’s ensuing shot unluckily hit the crossbar to keep the contest even. Later, Jan Flores scored the eventual game winner midway through the half on a 1-2 play with Austin Cruz. Cruz later got his taste of a goal 13 minutes into the second half on an assist from Flores. Six minutes later, after Rovers FC goalkeeper Taro Miyamoto mishandled Jeremy Copple’s shot, Keith Surber slammed in a follow up shot to give his team a 4-1 advantage. Joe Cruz made good on a penalty kick in the 79th minute, and another Flores goal in the 88th minute gave the Cobras a 6-1 lead. Cristian Surber tried his luck at the goal in the final minute of the game sending his shot on frame. Miyamoto got his hands on the shot, but wasn’t able to secure the ball before it eventually rolled past the goal line for the final score. The Cobras will next face the Crushers FC 7 p.m. Saturday for a spot in the semifinals.

Big Blue blanked IT&E/IP&E 5-0 to move into the quarterfinals. Jerran Lizama, Derrick Cruz, Ryan Crisostomo, Gideon Tyquiengco and Zachary Camacho each scored once in the victory. 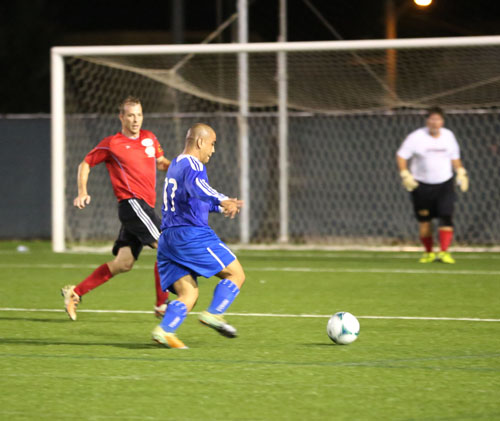 [Big Blue’s Jerran Lizama (17) makes a break for the goal against IT&E/IP&E in a match of the 2013 Guam FA Cup presented by Bank of Guam and Table 35 Restaurant and Bar at the Guam Football Association National Training Center. Big Blue blanked IT&E/IP&E 5-0 to advance to the quarterfinals.]