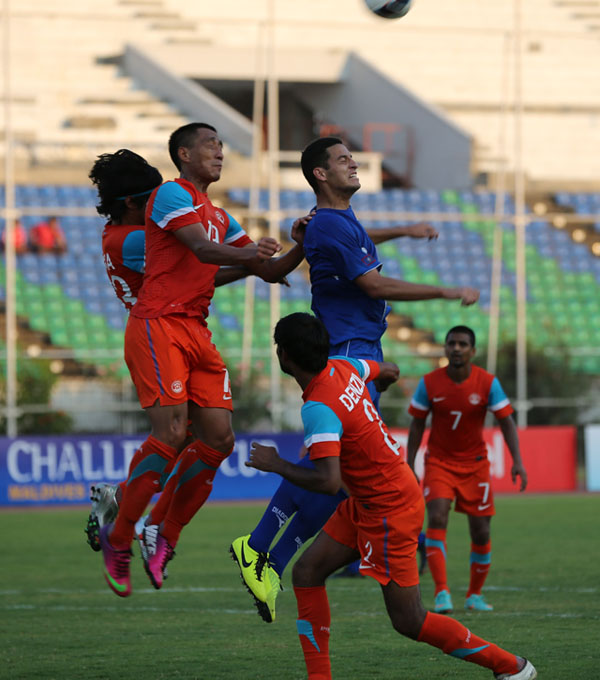 Yangon, Myanmar– The Matao displayed the fervor of an extremely aggressive team early on, creating shot opportunities from all angles of the field but eventually succumbed to late goals by India in a Day 2 match of the AFC Challenge Cup Group A qualifier at Thuwanna Stadium in Yangon, Myanmar.

“The first 50 minutes, there was no difference between the teams, but the international experience of the Indian team came through in the end,” said Matao head coach Gary White in a post-match press conference.

“There’s always pressure on results – this is a result-oriented business, but anyone who watched the game would see that it was a close game. There wasn’t much difference between the teams, except maybe a little more maturity, and more games played by the Indian side,” White added.

The Matao played mostly a tight possession game in the first half to break down India’s defense and find shot opportunities. Guam’s first shot came in the opening minutes of the match when Ryan Guy took a Shawn Nicklaw through-pass straight to the goal and blasted a shot that just pinged off the right post to keep Indian goalkeeper Paul Subrata on high alert.

Moments later, Guam’s John Matkin burned an Indian defender after running down a pass from Nicklaw to the right flank. Matkin then powerfully sent a cross to Ian Adamos on the left side before being slide tackled but the left-side winger was unable to convert on the play.

Jonahan Romero, Ian Mariano and Christian Schweizer had their share of strikes to the goal after beating Indian defenders through the center of the field before the end of the first half, but goals still eluded both teams.

[The Matao’s Travis Nicklaw leaps to head the ball in a corner kick play against India in a Day 2 match of the AFC Challenge Cup Group A qualifier at Thuwanna Stadium in Yangon, Myanmar. The Matao fell to India 4-0.]

A controversial goal by India’s Sunil Chhetri in the 49th minute became the eventual game winner. Center referee Khurram Shahzad of Pakistan ran into a pass from Guy meant for Romero and the Indian team took advantage of the play to counterattack. Chhetri, arguably offside, scored on the play. India doubled its lead in the 68th minute on a strike by Clifford Miranda and then tacked on two more goals – a Jewel Raja Shaikh header off a corner kick and another by Chhetri in stoppage time for the final score.

Guy, Matkin and substitute Marcus Lopez each had a few opportunities in the second half to open scoring for the Matao, but were unable to convert before the final whistle.

“Once you score the first goal, and quickly the second, it brings resistance by a team like Guam, but I have a lot of respect for the guys (from Guam) – they worked really hard,” said India’s Dutch head coach Wim Koevermans in a post-match press conference. “The first part of the game … we were very sloppy in keeping the ball and giving the ball away too often to the blue color – I told the guys, today we wear orange, not blue, so make sure you play the ball to the orange color.”

The Matao next play Chinese Taipei Wednesday at 4 p.m. Myanmar time. Guam will need a win to secure a bronze finish. In Guam and Chinese Taipei’s most recent match up, the teams settled for a 1-1 draw.

In the evening game on Day 2 of the AFC qualifier, a late penalty kick by Chinese Taipei forced a 1-1 draw with host country. Myanmar will need a win over India Wednesday to advance to the 2014 AFC Challenge Cup in the Maldives.