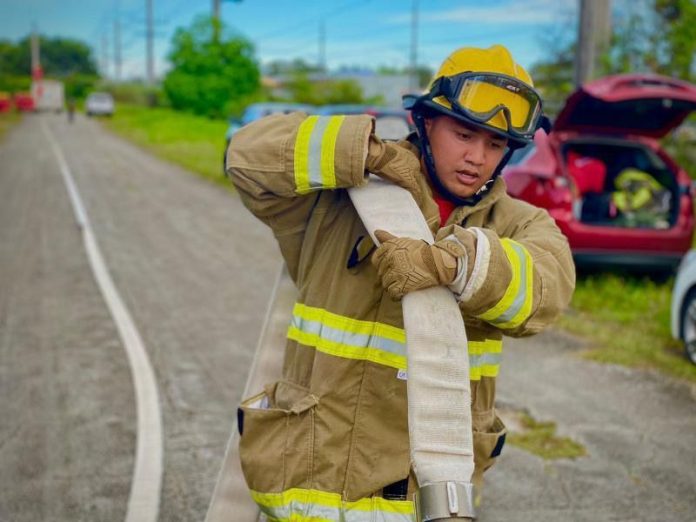 33 new firefighters will be joining the Guam Fire Department. Along with serving the community, the new first responders will be alleviating the short staffing issue that the Department has been facing.

Reporting on the graduation and the shortage is PNC’s Devin Eligio….

Over the weekend, GFD graduated 33 new firefighters into the force.

Graduates had to go through 6 months of intensive physical training and fast-paced classes in order to reach graduation.

One graduate, Joshua Sablan, said that the hardest part of training for him was the mental stress caused by physical exhaustion and keeping up with the class.

The reason Sablan wanted to become a firefighter, he says, is to follow in his uncle’s footsteps. He was also inspired by the emergency responders that helped him throughout his life.

Chief Stone said, “As much as we’re excited to have them on board, that is an addition, but it’s not where we need to be. And we continue to work to get to those numbers that we need to be at.”

One concerned resident from Inarajan called into Newstalk k57 with Patti Arroyo and shared that he was having trouble seeking medical attention last night.

The fire station that answered the man’s call informed him that Inarajan did not have an ambulance in the station. They told him the nearest ambulance was in Talofofo.

The GFD personnel that answered the man’s call told PNC that the man was actually seeking medical advice. The personnel says they advised the man to call back if he continued feeling unwell and needed dire medical attention.

Chief Stone explained that they had to move Inarajan’s ambulance to Talofofo because Talofofo’s ambulance is not in commission.

He clarifies that the issue is not so much an ambulance shortage as much as it is a staffing shortage.

He also added, “But all of our vehicles, all of our apparatus, are strategically placed throughout the island to meet all of our response times.”

Chief Stone shared that all GFD personnel are EMT certified. This means that they can provide medical help along with their duties as a firefighter.

Stone further said, “Rest assured, we are still able to maintain our mission requirements and respond to any call for service or emergencies.”

Joshua Sablan says graduating feels amazing and unreal. He says he’s backed by a good support system of family and friends who kept him going throughout the journey. He looks forward to serving the community along with the 32 other graduates.