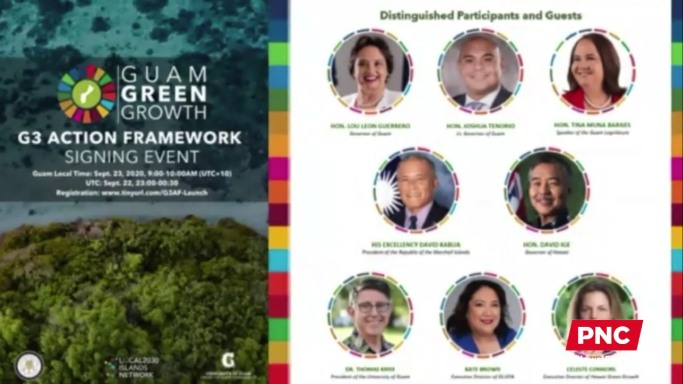 In a virtual signing ceremony Wednesday morning, the two Adelup leaders put in motion the 10-year strategy to develop tangible solutions to sustainability challenges faced by the island and contribute to Guam’s green economy.

Governor Lou Leon Guerrero, in her opening remarks, spoke of how crucial it is to keep the environment a high priority despite the COVID crisis.

“Even the medical response to health emergencies reveals how unsustainable our current process is. A majority of PPE is single use and we are generating a significant amount of medical waste,” Leon Guerrero said.

She added: “Knowing that there is a global shortage of PPEs and aware of their single use, we are currently procuring a machine that sanitizes use, which means our frontlines can use them multiple times.”

Hawaii’s Governor and the RMI President both spoke of their own green initiatives, which complement Guam’s priorities.

Governor Ige also spoke of the importance of banding together as islands to speak as one voice.

“As islands, we also see the impact of climate change and sea-level rise in a real way. From hurricanes to wildfires, coral bleaching and king tides to flooding rains. These impacts are happening each and every single day,” Ige said.

As for what’s next, Austin Shelton, who heads up UOG’s Center for Island Sustainability, says they’re getting started on initiatives such as a Makerspace at Chamorro Village to turn trash into usable items and launching food-security programs, including community gardens.

The Action Framework was developed by the G3 Working Group, which is made up of more than 80 members from the public and private sectors.

The G3 officially launched in January this year after its formation by executive order last fall.