Guam –  The San Isidro Elementary School has a new library built by the Guam Guard and Philippine Air Force (PAF) engineers that would benefit at least 750 schoolchildren in the community. A ribbon cutting ceremony was held on May 19 at the school to officially open the new room.

Several AFP and Guam Guard leaders, as well as the 13-member team of the 254th RED HORSE Squadron and the 5-man team from the 600th Air Base Wing, were on hand to celebrate the turnover.

The 254th RHS Airmen completed the building as they took on the last phase of the project, installing the roof and ceiling, plastering and painting the interior and exterior walls, and sealing the concrete floor.

Earlier in the month, 10 members of the 1224th Engineer Support Company started on the project with horizontal work, pouring a concrete pad, installing a septic tank for the bathroom, as well as putting up the columns.

The mission was geared primarily to support the Armed Forces of the Philippines (AFP) Reserve Command through a Subject Matter Expert Exchange (SMEE) under the State Partnership Program (SPP).

School Principal Leilani M. Capati said the new library will greatly benefit her school children. There are at least 40 non-readers identified by teachers and part of the problem is attributed to the lack of books at the school, she said.

[Members of the GUANG 254th RED HORSE Squadron take a break for a group photos, halfway into the construction of a new library for the San Isidro Elementary School in Santa Ana, Pampanga, Philippines. The project was an initiative under the National Guard Bureau State Partnership Program. (GUNG Photo by CPT Ken Ola)]

“We have a ‘No read, no pass’ policy. This library that is provided can benefit more than 750 children here at the school,” Capati said.

The school serves at least 750 children in grades K – 6, all having to fit in 19 classrooms, according to Capati. There are 19 teachers in the entire school, pinning the ratio at a minimum of 40 students to one teacher, based on last year’s enrollment. Teachers said they expect at least a two percent rise in the number of students in the coming school year.

There is a significant number of non-readers in the Philippine school system overall, according to Capati, although it is hoped the new K-12 curriculum in the Philippine Department of Education is designed to decrease that number. Currently, students in the Philippine education system go through 10 grades to complete elementary and high school requirements.

Capt. Christian Cruz, 254th RHS team Officer in Charge, said overall the project went smoothly. The only real challenge was obtaining the materials and getting them delivered on time, he added.

Cruz said engineer projects like this, where his team is able to work with local AFP engineers, is a benefit to the community and helps his Airmen sharpen their skills. 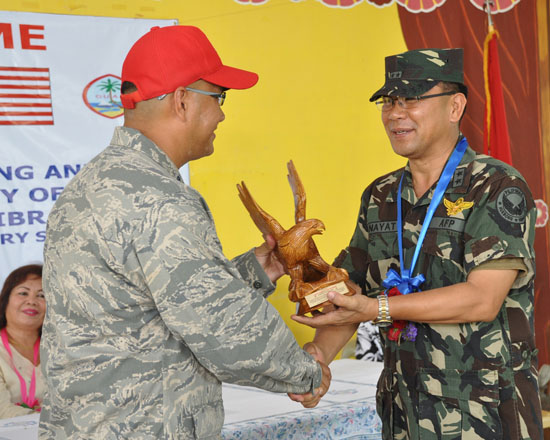 The approximately 430 square foot library still needs a lot of books and shelves, said librarian and teacher Kristel Alimagno. Two boxes of books arrived before the ribbon cutting ceremony donated by Bayview Church and Faith Bookstore, two organizations on Guam, after they heard about the need for books at the school.

The engineer civic action project is part of the State Partnership Program Subject Matter Expert Exchange initiative under the National Guard Bureau.  Missions like these through the SPP also help strengthen relations between the Republic of the Philippines and the U.S.  The SPP is a Department of Defense sponsored program administered by the National Guard Bureau (NGB), partnering Guard units from different states with selected countries for nation building, among other projects. The Philippines is the Guam Guard’s partner state.