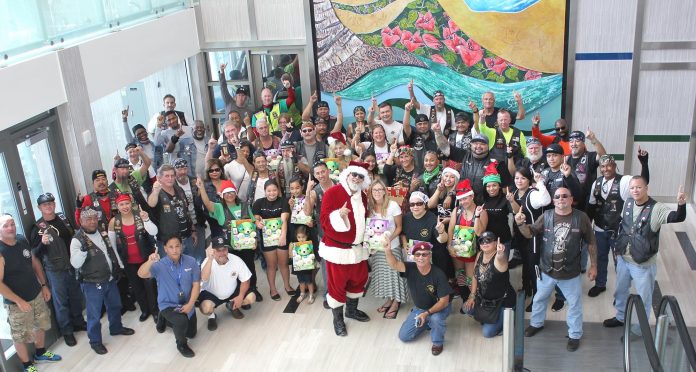 The Guam Hawgs group included GRMC in its annual “Christmas in July” celebrations.

Guam – While the pediatric unit at the Guam Regional Medical City remains closed, that didn’t stop one local group from making a donation to the ward.

The Guam Hawgs were out in full force yesterday, strolling by the hospital to donate a dozen teddy bears to the pediatric unit. The donation is a part of their annual “Christmas in July” celebration, an event in which they provide presents to hospitalized children. The Guam Hawgs acknowledged the closure of the pediatric ward but said in a release that they were optimistic that the nursing shortage situation would improve and with that the pediatric unit will have gifts on hand ready to help cheer up the children. The pediatric unit at GRMC was shut down last week Wednesday after three nurses suddenly resigned. GRMC says they are also facing a critical nursing shortage as a majority of their H2B visa renewals were denied, however, they are in the process of applying for a different visa, the E2 visa, which would grant workers a possible term of up to five years on Guam if approved.