Today, Senator Telena Nelson introduced a bill that will ban abortions after anywhere between 5 weeks and 6-and-a-half weeks on average.

“The Guam Heartbeat Act of 2022 was created for one reason–and one reason only,” said Nelson. “It is a bill to protect—to protect—our most vulnerable and give every single human with a heartbeat the fighting chance to live a life, to be able to breathe, to live freely, and experience the opportunity to be on this Earth, like all of us here today.”

Modeled after the Texas Heartbeat Law, Bill 291-36 enables a member of the public to sue a physician who performs an abortion after identifying a heartbeat from a fetus. For context, a heartbeat can be detected, on average, anywhere between 5 and 6.5 weeks.

“However, it does not allow any government official or any employee to file a lawsuit,” Nelson said. The bill also protects a woman seeking an abortion from a lawsuit.

The only exception the bill allows is if the fetus poses a risk to its mother’s health.

Violating the bill would result in minimum statutory damages of $10,000.

According to Amy M. Branum and Katherine A. Ahrens from the National Library of Medicine, among all pregnancies reported in the study, a person was aware on average 5.5 weeks into their pregnancy. The study also identified prevalence of late pregnancy awareness was 23%.

Pro-choice activists argue consistently that the Heartbeat Act would cause a rise in unsafe abortions.

However, Nelson told PNC that she believes this is true.

“If it is passed and then becomes law, it reminds us what life is,” she said. “It reminds us the sanctity and the sacredness of life. And I believe that we need to be reminded of it.”

“It is also moot legislation because we do not currently have any doctors on Guam who perform abortions, or any doctors on Guam that provide medically induced abortions,” Director of the Bureau of Women’s Affairs Jayne Flores stated. “If we really want to be pro-life, we as a community need to worry about the children on this side of the womb.

“Children like the 5-year-old boy who died recently because of neglect. Being ‘pro-life’ is addressing the nearly 2,000 children in our foster care system.”

According to Nelson, before making this bill, she made sure Guam had the available resources to help women who may not want to keep the child after birth.

Split equally among licensed foster homes, each would have to carry about 12 children. 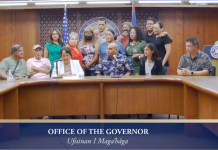