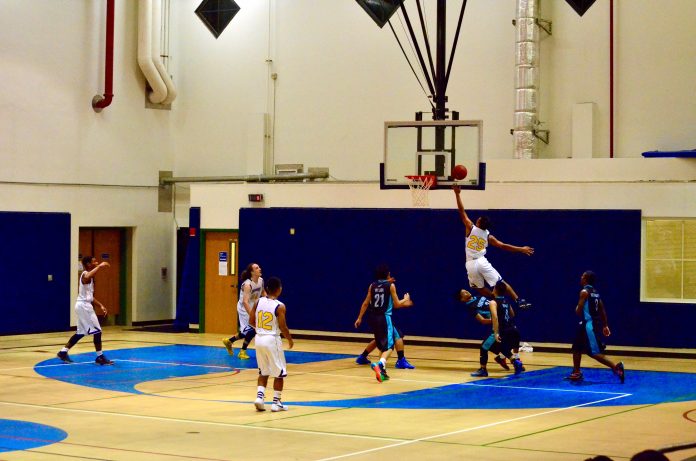 Guam High Panthers hosted the Dolphins from Southern High. A familiar face on the bench for Guam High. Legendary Guam Coach, Joe Tatiano. Coach Taitano has been out of the game the past 3 seasons, but it didn’t show a bit. The Panthers come out strong and never let up. The Southern squad give up costly turnovers throughout the contest. The Dolphins coached by Brent Tipton, were never able to settle things down and find a rhythm or get their scorers in position. Panthers get a lot of points via easy lay-ups, in transition after capitalizing on Southern High’s mistakes. Returning Guam High Senior standout Jujuan King was back after spending last season with Father Duenas. King able to get points for the blue and gold. Unfortunate night for Southern’s offense. The shots they were able to get off just wouldn’t fall, and that’s the way basketball goes sometimes. The Panthers of Guam High who finished 3rd in 2014 trying to return to that form, off to a good start. The out swim the Dolphins 75-25 the final. The Panthers look to build on this win, when they host the GW Geckos Friday night.

A look around the league at some other scores from opening night. The FD Frairs spoil the first ever game in the new Tiyan Titan Gym. 64-28 the final in that one. The St. John Knights win the saintly showdown beating St. Paul by 14. 75-61 the final in upper Tumon. Two time Pre-Season Champs GW, lose 59-51 to the Notre Dame Royals in Talofofo in a nail biter. Okkodo High Bulldogs clip the wings of the Harvest Eagles, beating them, and defending champs the JFK Islanders, in a game that was moved from Sanchez to JFK last minute, get a good start to defending the title. They win their season opener last night running their streak to 1-0 on their home court. That record dating back to last season. It’s Islanders over the Sharks by 1! 48-47 the final from Tamuning.