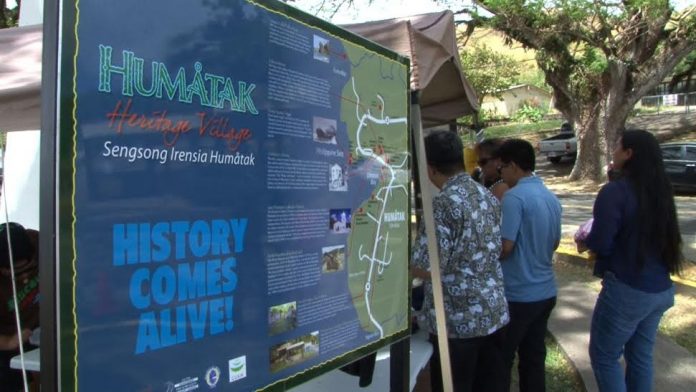 Guam – To kick off Chamorro month or Mes Chamoru the village of Umatac or Humatac held festivities all weekend and today as part of it’s Guam History and Chamorro Heritage Day celebration.

It used to be called Discovery day now its called Guam History and Chamorro Heritage Day. It’s a GovGuam holiday that was taken away and then given back just last year thanks to a bill introduced by Senator Tommy Morrison It’s a celebration that the people of Umatac or Humatac have been holding for generations originally to commemorate explorer Ferdinand Magellan’s landing on Guam and now to celebrate Guam’s rich history and it’s unique Chamorro heritage. “This is not only about Umatac this is all about everybody it’s about the Chamorros you know we want to make everybody come down here because this is a holiday. This is what it’s all about it’s about the Chamorros. So we want everybody to come down bring their family down come down and enjoy themselves,” said Umatac Mayor Johnny Quinata.

At the festivities people can enjoy all sorts of food entertainment and games like coconut husking a greased pig catching competition as well as re-enactments of the landing of Magellan. The Humatac Community Foundation is also holding tours of Humatac’s 6 historic sites. “Each site has at least 3 or 4 youth that can share with visitors the history of that site the history of Humatac and again share with them how they live down here and what they do here,” said Mayor Quinata.

These sites begin with the F.Q. Sanchez school followed by the old San Dionisio church ruins that date back to the Spanish era. Then there is the San Dionisio church that was built in 1939. “Right behind that church is the foundation of the old Governor’s palace the palacio the summer palace during the Spanish period the Governor would come down here and spend the summer waiting for the ships to come in right after that you walk down the street and you hit the outdoor library the one and only outdoor library right here on Guam you go down a little further and you will meet the youth down at Fort Santa Anghel and they will explain to you about that fort.”

The festivities kicked off Friday and will last until 12 midnight tonight before picking up again next weekend. The final celebration will be on Sunday of next weekend.