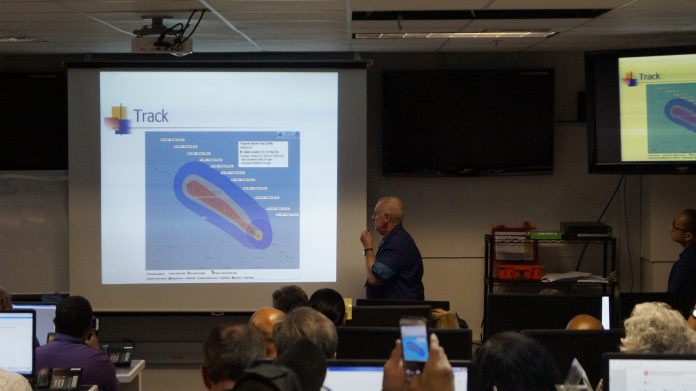 Guam – Tropical storm Yutu is now Typhoon Yutu and is making its way to the Marianas.

As of the 4:44 PM update from NWS, Yutu, originally anticipated to impact the Marianas on Thursday, will instead begin to impact the islands on Wednesday, before moving through on Thursday.

Typhoon Yutu, on its current track, is headed towards Saipan. At 3:06 this afternoon, the national weather service upgraded Yutu to a typhoon. As of the 2 this afternoon, the eye of the typhoon was about 450 miles east-southeast of Guam. The storm is moving westward at 14 miles an hour.

At today’s heavy weather briefing at Guam Homeland Security/ Office of Civil Defense Meteorologist Chip Guard said poorly constructed buildings could sustain moderate damage, and that tarps and canopies should be secured, if not dismantled. With an election just around the corner, political signs should be well-secured or taken down, or else they could be blown away.