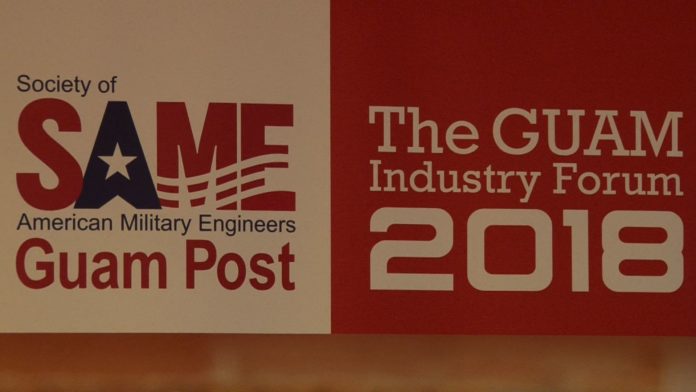 “From my understanding there was no reason to have one after 2009 until recently because as you know the program took a move to the right. It had a lot of delay and paring it down from something like 10 thousand marines to now five thousand,” explained Society of American Military Engineers or SAME (pronounced “Sammy”) President John Robertson.

And now at the Navy’s request SAME has brought the Guam Industry Forum back.

“Do you think the revival of this forum is a good indicator that the buildup is back on track and should be occurring shortly?” asked PNC.

“Yes. I wouldn’t say it’s on track to start, it’s underway now. As was mentioned this morning some of the projects have already been executed [or] finished. Others are in process of being under procurement by the Navy and others are under construction. So, this time around there’s not much reason for people to think that It’s going to be stopped or interrupted,” said Robertson.

One of the main sponsors of the forum is a federal contractor called Northwind. It’s a subsidiary of Ciri which is a large Alaskan native company. Northwind does both construction and environmental work. It’s parent company Ciri is a nearly billion-dollar corporation with offices all across the U.S.

“We’re Alaskan owned and we have both construction capabilities and environmental capabilities. We’ve been watching the area for quite a while and we didn’t want to take a small step into the arena we wanted to take a big step,” said Northwind Chief Business Development Officer Brady Bigelow.

Part of that big step is sponsoring the Guam Industry Forum in order to meet with the local community and local small businesses.

“We are set up in a way that we must partner with local companies both on the labor side and sometimes technology. We’re gonna focus on bringing in the community. We do a lot of work like that in Idaho and some other states where we have up to an up to an 85 percent local hire requirement. So that’s something we want to make sure that we bring here and that we don’t walk away at the end without supporting the community in some way. You know building perhaps projects managers and site supers you know not just laborers. To build those companies up to be able to stand on their own two feet,” said Bigelow.

“We think the turnout’s been fantastic it’s probably one of the best attended events that we’ve actually been involved with. So, we’re very very happy with the turnout and just the participation of the people that are actually come here and the interest as far as teaming with us and wanting to work with us for the future work at the base,” said President of Northwind Construction Services Brent Brooks, adding, “This is really important to us that’s why we came in here as one of the primary sponsors because we really this is where we think we need to be. We’re getting ready to open up an office here. We’ve been looking at properties so within the next several months we’re going to have our own office here and start staffing it with people.”

Hensel Phelps, Granite, Watts Construction and Black Construction are examples of some of the larger companies that participated in this year’s forum.

September 25, 2020
@PNCGUAM INSTAGRAM
A number of businesses held a protest at Adelup ye