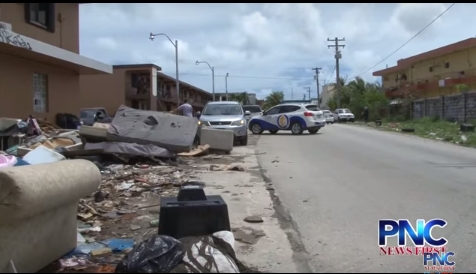 This is the third notice issued to Hemlani Apartments for solid waste violations.

Guam – The Guam EPA is cracking down on Hemlani Apartments. In the wake of an attack on a police officer, Owners of Hemlani Apartments have been issued a notice of violation for essentially operating an illegal dumpsite.

After an attack on a police officer at the Hemlani Apartments in Harmon, a spotlight is now on the Hemlani apartment complex to clean up or face sanctions from multiple government agencies. In fact, Hemlani is facing a solid waste notice of violation from the Guam EPA. GEPA tells PNC that Hemlani, faces 4 possible violations because he was consolidating trash from all his other complexes and dumping it at the Harmon location. He now faces a 1-thousand dollar fine for each day the trash is not picked up. This is the third notice of violation Hemlani has received according to GEPA.

In a meeting yesterday at Adelup, Hemlani met with GHURA, Public Health, Guam Fire Department, and Department of Revenue and Taxation.

“We basically did indicate to him that we will be taking a closer look, all the regulatory agencies that are involved will be reviewing things to ensure, to determine whether or not his particular complex is in compliance, “said Duenas. “There’s a law about rodents and property owners are responsible for ensuring that they don’t foster conditions or establish conditions that foster rodents and that would be including proper disposal of trash and food waste. Those are the kind of laws that are in the books now, it’s a matter of whether the regulatory agencies involved have that flexibility to pull staff.”

According to Duenas, GHURA’s involvement started with Governor Eddie Calvo expressing concern to Duenas at a ribbon-cutting event; about the 12 section 8 families are living at Hemlani. Duenas says Section 8 residents can request to be moved if they do not feel safe in their complex. So far, no families have notified case workers of a transfer, but Duenas says it can still happen.

“That’s something that we will review. If they feel they are in danger, that’s something…there’s something in place for a request to terminate an agreement before the lease itself has expired. Our case workers and section 8 administrator can easily respond to any request for a transfer,” said Duenas.

GEPA says Hemlani does have the right to appeal his violations.