You got that right! These ladies are making history! More than mere distaff, the incoming women of the 35th Guam Legislature will literally run the show! And they will dominate the first legislature in the United States to be populated by a majority of popularly elected women. Here’s more on what some are now calling Guam’s new Ladies-slature.

Guam – Move over manhood, the ladies run this house! Island voters have just elected ten women to the island of Guam’s 35th Legislature. A 15-member unicameral body serving a population of 170,000.

“That’s right, that’s actually something that we anticipated, said reelected incumbent Sen. Regine Biscoe Lee, Chair of the Committee on Rules, Legislative Secretary, and Guam’s Democratic Party Chair. “We had a lot of really great candidates come out—both male and female—but we’re looking at a 10-5 Democratic majority and a 10-5 female majority.”

“I am so happy for the Democratic majority and the majority of that being women,” said former senator and new Senator-elect Tina Rose Muna Barnes.

“I’m excited about that too,” reelected Sen. Telena Nelson said. “A lot of the women that I know who are running have a lot of strong qualities…have a strong career background. They’re focused on really helping the island, helping the people, the poor, the struggling, and also protecting our natural resources.”

Never before has this lawmaking body in the Western Pacific had anywhere close to a two-thirds majority of female senators. And Guam’s senators-elect cross the partisan divide, with three (3) Republican women winning and seven (7) Democratic women claiming victory at the polls. Among the woman winners are five (5) incumbents and two (2) returning senators.

While pre-count Nevada has reportedly been poised to become first to elect a majority of women to a state legislature on general election day, the unincorporated United States Territory of Guam could actually claim the title of first US legislature to achieve this distinction, following ballot certification.

That’s a big feat for such such a far-flung member of the republic, occupying a mere 212 square miles of earth on a resort tropical island paradise hosting Army, Navy, and Air Force bases.

That may sound like a whole lot of macho for such a tiny place. But the legislature isn’t the only institution to turn on its heels. Guam just elected its first woman governor, too. Democrat Lou Leon Guerrero’s husband, Jeffrey Cook, will be the island’s first “first gentleman” and Leon Guerrero’s running mate, Joshua Tenorio, will be Guam’s first openly gay lieutenant governor.

After eight years of rough and tumble jousts with the executive branch that has in recent years seen Legislative Rules Chair Biscoe Lee repeatedly denigrated for alleged incompetence by the executive branch when she refused to do male governor Eddie Calvo’s bidding, the new governor-elect set a tone of magnanimity with no negative campaign ads throughout her bid for the island’s highest office.

“But what you’re gonna see is, again, much more communication, working together, as opposed to kind of fighting it out, trying to improve, improve these pieces of legislation that we will send  on to our female governor,” Biscoe Lee said with an appreciative smile.

Here’s a breakdown of the top 20 finishers in Guam’s legislative race after the Nov. 6 general election: 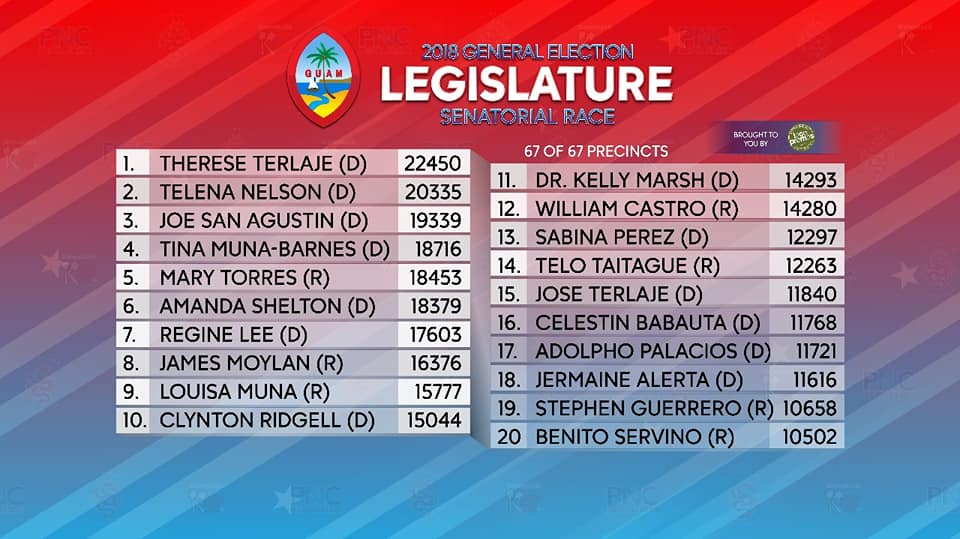 The Democratic Party of Guam issued the following statement: In Guam, where “America’s day begins,” morning has broken

Hagåtña, Guam – History was made today in the U.S. territory of Guam. Voters elected the island’s first female Governor, first openly gay Lieutenant Governor, and, for the first time in the island’s history, women will outnumber men in the Guam Legislature. In fact, in the coming term, it is likely that all three branches of government – to include the judiciary – will be headed by a woman.

10 of the 15 Senators in the upcoming 35th Guam Legislature will be women – and most of them Democrats. DemocratLourdes “Lou” Leon Guerrero captured 51% of votes cast in a three-way contest for Governor, beating the sitting Republican Lieutenant Governor and a write-in candidate and longtime Senator. Leon Guerrero’s running mate Joshua “Josh” Tenorio will become the island’s first ever openly Gay Lt. Governor.

Guam voters will also send a new Delegate to Congress in January. Senator Michael F.Q. San Nicolas, who beat the 8-term incumbent in an August Democratic Party Primary, handily beat his Republican opponent. Senator San Nicolas at 37, is the youngest ever Guam Delegate to Congress. He joins Gregorio Kilili Sablan, Amata Radewagen and Tulsi Gabbard as the only Pacific Islanders in Congress and will be joining the new House Democratic Majority.

According to Senator and Democratic Party Chair Régine Biscoe Lee, “We didn’t win for ourselves, we won for those who wanted change and were willing to work for it. Guam is where America’s day begins and so from our little corner of the pacific begins a tidal wave of change that sweeps across our nation and turns the page on the politics of divide and conquer.”

Morning has broken. And it is a beautiful day indeed.

For more information, contact:  Jennifer Louise Dulla at 482-5556 or democraticpartyofguam@gmail.com.