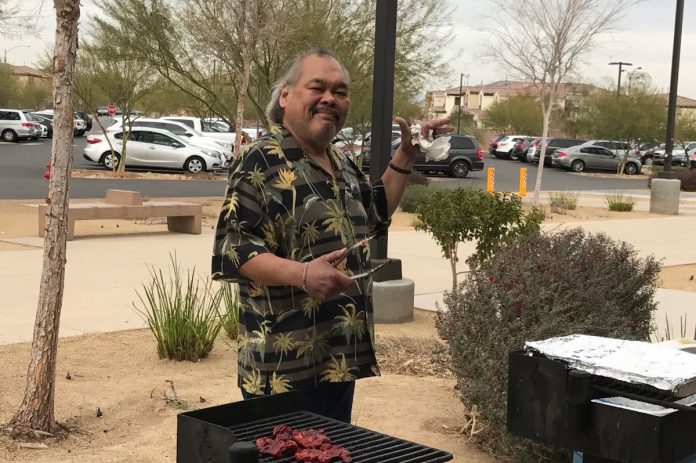 Guam – A family in Grandview, Missouri with ties to Guam is seeking answers, saying they believe police used excessive force when they were called out to Larry San Nicolas’ residence to assist the family.

We spoke with his wife, Jessie, who says her husband had a diabetic manic episode and was not armed with a firearm when police shot him dead in front of his family.

Jessie says her husband is diabetic and was suffering a manic episode due to a lack of insulin. San Nicolas’ family contacted police to assist because he was erratic and was trying to hop into a vehicle to drive away.

Concerned that Larry could hurt himself or others in an accident because of his condition, the family called 911. By the time police arrived around 2:40 p.m. Sunday, Larry had retreated to his house, holding in one hand a decorative sword and in the other the cover for it.

One officer arrived across the street to Larry’s son’s house and started taking notes.

“This is the one we told he’s a diabetic, then he writes down diabetic, could be high, you know, needs insulin probably,” recalls Jessie.

But the rest of the quad cars pulled up to Larry’s house, heavily armored like they were about to take down an active shooter suspect. Except Larry wasn’t an active shooter at all and the sword he was holding was dull, meant as decoration and definitely not for combat, says Jessie.

And the first cop who took down the notes about Larry’s condition? He never relayed the message to the rest of the force.

“They were putting AR-15s on their shoulders and everything and they stood behind my daughter’s vehicle,” notes Jessie, adding that the black SUV was blocking the driveway to Larry’s home. “He came out and they didn’t even really have to tell him … to put his hands up, I don’t think, but he walked with his hands upward the whole way.”

Jessie says the officers shot Larry with bean bags at first which can be seen in the video recorded by neighbors. He stumbles forward because their gravel driveway slopes downward and then out of nowhere–“Boom, boom, boom, boom, boom!”

“As soon as they shot it, I saw his stomach go, his whole white shirt went red,” remembers Jessie. “But I, when the first shot came, I yelled, ‘Why the hell did you have to shoot him? Why?’ And pretty soon, you know, then you’re hysterical and I’m trying to run to get to him. They wouldn’t let me and I told them he’s probably dying, you probably killed him, he’s just dying there.”

A memory that will stay with Jessie forever is her husband’s dying words.

Out of view from the family across the street because of the black SUV in their way, Jessie says they assumed police officers were applying pressure to Larry’s wounds in an effort to save his life. It turns out, after seeing corroborating video, the officers never touched him.

To make matters worse, Jessie says they weren’t allowed to leave to follow Larry to the hospital until the scene was “cleared.” In fact, the first ambulance that arrived on scene was not used to immediately transport the shooting victim to the hospital.

PNC: “They put the officer in the ambulance before your husband and the officer wasn’t hurt?”

“No, he was in trauma. He was just traumatized,” notes Jessie. “It took 7 more minutes for another ambulance to come get my husband without sirens.”

Distraught and occupied with concern for their loved one at the hospital that evening, Jessie says they weren’t able to pay attention to any of the media reports which by then had spread like wildfire. But the reports painted Larry out to be a hostile suspect when teh family says the situation was nothing more than a man needing medical assistance because of a manic episode.

“Even if they thought the sword was real–I’ll give them that. I’ll say OK, they thought the sword was real, maybe they just heard sword over the intercom … but they’re gonna take AR-15s when they know he’s only 60 years old and might have a sword on him but they’re gonna line up there and take AR-15s to the house?” laments Jessie. “Put it this way, 25 seconds is so short to try and get, you know what–they didn’t even try to tell him, get down on your knees or we’re gonna tase you, stop or raise your hands behind your head.”

All this, a scene America’s becoming all too familiar with; police using unnecessary excessive force in a situation that could be better handled using less lethal means, unfolded in front of the family, including Larry’s young grandchildren who Jessie says are now undergoing counseling to deal with the trauma of seeing their grandfather get violently shot by police.

“We lost our rock. Because he held us all together. He was the chef in the house. Everybody, today, today we had to barbecue, my son was crying because he usually does the barbecuing,” says Jessie.

And now the San Nicolas family is reeling from the loss of a great father, husband and grandfather.

“He would give the shirt off his back to anybody he knew if they needed it. He would help anybody if they called him up and they needed help, he would stop doing what he’s doing and go out there and give it,” Jessie shares.

The San Nicolas family has set up a gofundme page to help with funeral expenses and other expenses for the family.

Meantime, the family says they are considering seeking legal action against the police department. As of news time, it’s not clear if the officers involved have been suspended or placed on leave.

Larry San Nicolas is from Sinajana and left Guam in the early 1990s.