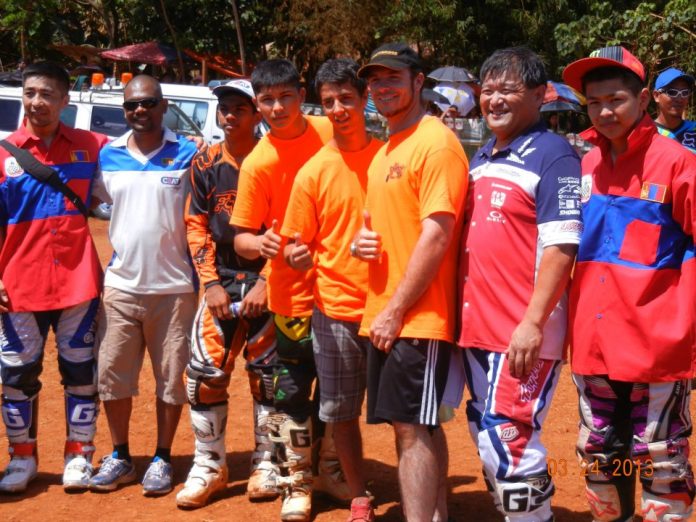 In the MX2 or the 250cc class, Guam had 3 riders.  For JR Cepeda, this was his second FIM Asia motocross race outside of Guam as he raced in the same venue several years ago as a 85cc Junior class rider.  This is Jacob Einloth raced the entire series in 2012 but this is the last series as he will be attending college in Florida this fall.  Tim Wenden joined the team as a new rider for the series but has been racing for most of his life.  JR placed 11th and 7th, Jacob placed 13th and 12th in moto 1 and 2 respectively.  Tim was not able to enter the race after a mishap during the qualifying race on Saturday.

In the Veteran Class, ages 40 to 55, Stan Yasuhiro represented Guam, but had a bit of pressure as other riders in the class were anticipating beating Yasuhiro to dethrone him for 2013.  “I felt a bit of pressure pre-race as other Vet riders were coming after the championship by trying to finish ahead at the finish.  Some came right out and mentioned they will win.  But racing is racing.  Moto 1 was very hot and energy sapping.  It was difficult to maintain speed and push for a decent finish.  The racing was close.  But, in Moto 2, it was cooler and it felt much more relaxed and fun to race.  I led about 3 laps, then Molera passed by but was able to stay pretty close to him until the finish.  The rest of the pack was several seconds behind us.”

This year, there are 5 events scheduled.  Round 2 in Malaysia on June 9th, Round 3 in Mongolia on August, Round 4 in Qatar on November and Round 5 in Indonesia in December.