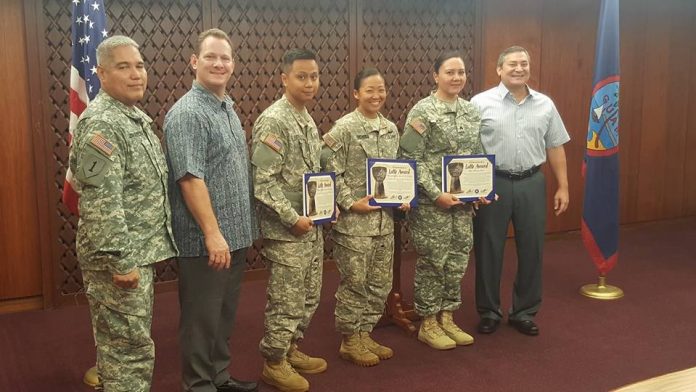 Well, they are Guam’s first flight paramedic group! Warrant Officers Brian Enderes and Sarah Uchida were recognized for being the Guard’s first two homegrown pilots after finishing 18 months of flight training at Fort Rucker, Alabama. Meanwhile, Sargent Melissa Meno is the Guard’s first flight medic after completing the intense 9-month U.S. Army Flight Paramedic and Critical Care Course this past summer. The group is the Guard’s first Aviation Unit and they will be using the two new helicopters the Guard received back in June for their missions. According to a release from the Guam National Guard, the Aviation Unit will grow the island’s local capacity to participate in search and rescue operations, as well as medical evacuations.
Governor Calvo says, “We’re beaming with pride because this is the first Aviation unit for our Guard and they’re coming with a very special purpose obviously for the safety of the people of Guam and whether its on some sort of event that occurs with the result of a man-made mishap or natural disaster. Part of that pride is the homegrown talent here.”
Sgt. Meno says, “I think serving the people in this capacity, helping them for medical emergencies, is something I’ve always wanted to do especially in this capacity, the first flight paramedic from Guam. It wasn’t something I planned on, but it’s something given to me and I’m going to take it and fly with it. No pun intended.”
According to the Governor’s Office, the annual contribution from this new aviation component is approximately $23.2 million annually, in salaries, equipment, facilities, training, operations and maintenance, and transportation.