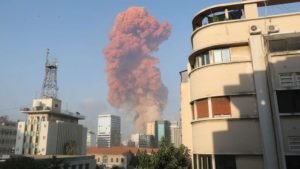 A massive explosion rocked the Lebanese capital of Beirut on Wednesday, leaving more than 70 people dead and some 4,000 people injured.

More than 2700 tons of ammonium nitrate was stored in the warehouse where the explosion happened.

Footage from the ground showed significant damage and plumes of smoke rising above the city. Some described the scene like that of an atomic bomb going off.

Veteran Guam journalist and Guam native, Ginger Cruz currently lives and works in Beirut. She lives about one mile away from the scene of the explosion.

She says at first she thought it was just a building fire.

“So we’re watching it for about 5 minutes then all of a sudden I start to see, it looks like fireworks going off in it, and I’m like okay, that’s probably not good…what if there’s like ammunition or something there…maybe a bullet could stray and come through the window. So I literally had just stood up and just started to walk away from the windows and there was actually 2 explosions and the first one was huge…so my husband comes running in and he grabs me. Then we run to the center of the house…and then the second explosion goes off and I mean it’s a shockwave. I thought an 8.2 earthquake on Guam was something but this was insane,” Cruz said. 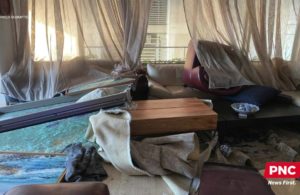 She added: “The explosion literally, blew the door into the house, threw the couches up in the air.”

Cruz says she and her family have bruises and gashes, but overall they’re fine.

With chemicals now floating in the air, and many homes without windows, Cruz says she’s worried about the health implications.

Lebanon as a country was already facing turmoil with economic uncertainty, COVID-19, and rising political tensions.