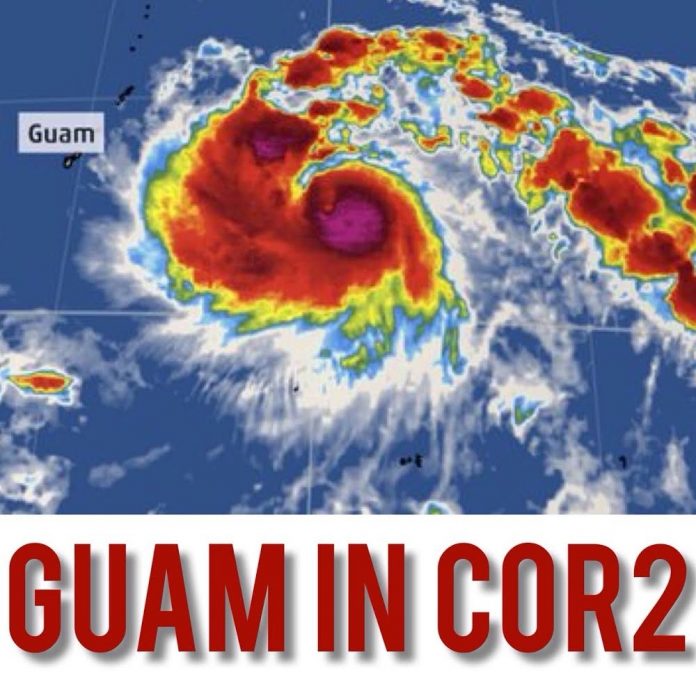 Governor Eddie Calvo has placed Guam in Condition of Readiness 2 for typhoon Vongfong. The typhoon is headed towards the Marianas. Although the latest forecast track has Vongfong heading slightly North of Rota, National Weather Service forecaster Chip Guard says it could move closer to Guam or Rota Tinian or Saipan over the next several hours. There is a typhoon warning for Guam Rota Tinian and Saipan which means that damaging winds are expected within these islands and the surrounding coastal waters within the next 24 hours. If it continues on it’s current track Guam could get winds of 45-65 mph with gusts up to 80 mph. Again, this can all change as the storm can easily move closer to Guam Rota Tinian or Saipan over the next several hours. Winds are expected to begin picking up tonight with the Typhoon reaching the Marianas by early Monday morning.
READ RELEASE FROM GOVERNOR’S OFFICE BELOW:

JOINT INFORMATION CENTER
Release No. 2
Oct. 5, 2014 (9 a.m. ChST)
GovGuam and the military now are preparing for typhoon-strength winds and rains on Guam within the next 24 hours. The military is moving key assets and the government of Guam is mobilizing island wide preparations for Typhoon Vongfong. That’s because, as of the latest information from the National Weather Service, this typhoon is coming, and it’s a real threat.
Governor Calvo and General Toth have placed the island in Typhoon Condition of Readiness 2. Mother Nature could change her mind at any time. Nonetheless, as this storm has come closer to the Marianas, its trajectory has not changed much.
This release will cover eight issues: clearing private and public properties, flooding concerns, dangerous water conditions, shelters, pregnant women, public schools, the government of Guam, and the flow of accurate information through media partners. We will present more information throughout the day. These are the eight most critical issues at this time.
This weather is the ‘Calm before the storm’ – use it to clear the yard
Typhoon Vongfong, now 475 miles east-southeast of Guam, is sucking the clouds away from Guam. That’s why it’s sunny and hot. This is the calm before the storm. Luckily, this is happening on a Sunday, when most residents have some extra time from work. Please use this time and this calm weather to clear your property; put up shutters; etc.
Much of the damage that hurts people, destroys cars and homes, and takes out power lines is from flying debris. This can be anything that’s not secured outdoors that heavy-winds can pick up and throw around. Please take any and all of these things around your property indoors.
The government of Guam has been clearing debris since the last storm.
Flooding
Even before damaging winds and rains happen, other rain showers will happen. That will saturate the ground. As the typhoon comes closer, the sea level will rise. These two conditions combined creates a force of Mother Nature that can’t be avoided – low-lying areas will begin to flood. These are areas such as Route 1 Piti in the Polaris Point area, Merizo through Inarajan, and Pago Bay. Other areas prone to flooding for other reasons also will flood. Drivers should be mindful of this when it begins to rain later today. Residents in low-lying and flood-prone areas should consider securing their homes in preparation of flood, and moving temporarily to a family member’s home or public shelter.
Dangerous water conditions
Waters will get rough as rains pick up and the storm gets closer. Please do not get in the water.
Public shelters
The Department of Education now is preparing designated shelters. Those shelters will open at 2 p.m. The Department of Public Works is preparing its bus fleet to take residents to the shelters, in case they don’t have transportation.
Pregnant women
Guam Memorial Hospital will begin accepting women at least 36 weeks pregnant, and those with sensitive pregnancies, at 5 p.m. today.
Public schools closed tomorrow
Guam more than likely will be in Condition of Readiness 1 tonight. COR2 is the trigger to close public schools. Therefore, the Superintendent has closed schoolstomorrow (Monday).
Government of Guam closed tomorrow
Likewise, GovGuam will be closed tomorrow (Monday). Only emergency and medical- and storm-essential personnel are on duty.
Accurate information will come through our media partners
The Joint Information Center yesterday confirmed with media partners listed below that they will make available to you information from the JIC. The JIC is the government of Guam, military, and federal government’s clearinghouse for accurate information about emergencies. In this age of social media, it’s really important for residents to rely on accurate information, and not rumors. We will release all news releases via our email list, which includes media partners, and the Governor’s and Guam  Homeland Security’s Facebook pages. The following is a list of media partners, where you can get this accurate information about Typhoon Vongfong as well:
·         Isla 630 AM
·         K57 AM
·         i94 FM
·         Power 98 FM
·         105 the KAT
·         KISH 102.9 FM
·         KHMG 88.1 FM
Please call the Joint Information Center at 478-0208/9/10 for more information.