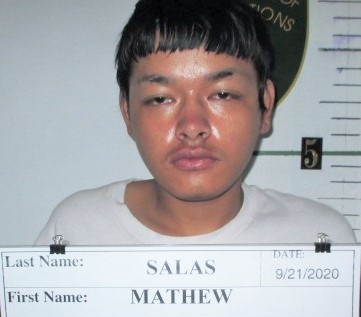 Guam police arrested an 18-year-old male after he allegedly tried to throw away a meth pipe he had hidden in his pocket.

On Monday around midnight, GPD says an officer was on patrol in Agat when they came across a vehicle driving in circles at the intersection of Route 2 and Pagachao Drive.

After the driver had done at least five circles, the officer pulled them over. When they approached the driver, the officer says they saw four males in the vehicle and then noticed a loaded magazine clip in the driver’s seat.

The officer then requested for backup.

When the backup arrived, one of the officers confirmed the driver was holding a firearm with the required documentation. GPD then asked all of the males to exit the vehicle and to keep their hands visible so they could confirm there were no other firearms.

Police say, as they were searching, one of the rear passengers started to reach for his pocket and tossed away something before police had time to restrain him.

In their report, officers say they retrieved the tossed item and found it to be a Ziploc plastic bag wrapped in yellow tape. Inside, there appeared to be a 3-inch glass pipe containing some white and burnt black residue. Suspecting the residue was “ice” or meth, the officers arrested 18-year-old Matthew Salas.

At the precinct, GDP say that Salas invoked his right to silence and did not make a statement. Police then performed a field test of the residue inside the glass tube which was presumptively positive for methamphetamine/amphetamine/MDMA. They then sent the suspected contraband to GPD Evidence Analysis to confirm the findings.

Salas was charged with one count of Possession of a Schedule II Controlled Substance (as a Third Degree Felony).