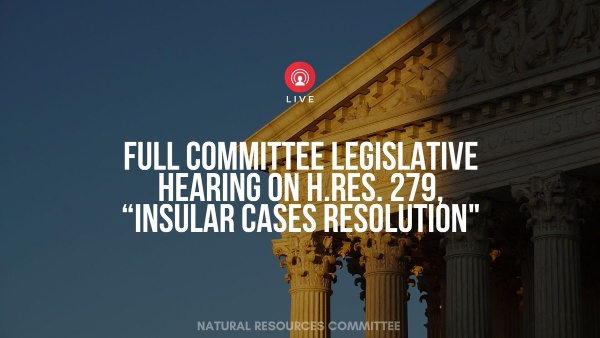 The U.S. Congress held a historic, first-ever congressional hearing on the Insular Cases.

The chairman of the House Committee on Natural Resources and Insular Affairs — Congressman Raul M. Grijalva — along with CNMI Congressman Gregorio Kilili Sablan, Guam Congressman Michael San Nicolas, and other members of Congress introduced a bipartisan resolution — HR 279 —- rejecting the Insular Cases as racist, and contrary to the US Constitution.

The Insular Cases are a series of opinions by the U.S. Supreme Court in 1901, about the status of U.S. territories acquired in the Spanish–American War including Guam. The opinions stated that full constitutional protection of rights does not automatically apply to these insular areas.

Basically, the Insular Cases allowed the United States government to extend unilateral power over Guam and other unincorporated territories.

At the congressional hearing, Vice Speaker Tina Muna Barnes testified in support of the resolution.

“The unequal treatment of the territories has also prevented American citizens from availing of federal programs that otherwise would have access to if they lived in a state. To challenge this unfair policy, Ms. Katrina Schaller of Guam filed a lawsuit in the District Court of Guam in Dec 2018. Katrina and her twin sister both lived with myotonic dystrophy, which severely inhibits muscle function and other critical aspects of daily life. Leslie is able to live independently in Pennsylvania due to aid that she receives from SSI. Katrina, however, is ineligible for the same benefits by virtue of her geographical location,” Muna-Barnes said.

The Vice-Speaker added that Atty. Rodney Jacob, who serves as Katrina’s counsel, testified that it is contrary to common sense, human decency, and public policy to deny public benefits to all other American citizens with disabilities living on Guam.

The Vice Speaker said that she amended her resolution to seek parity on this matter.

“Simply put, America has a colonist problem and the reason is clear: a series of early 1900s court decisions on the Insular Cases. As a consequence of the Insular Cases, 3.5 million residents of the U.S. territories are treated as second-class citizens and sometimes denied citizenship itself. From a civil rights perspective, the US continues to deny residents of the US territories the right to vote for president, voting representation in Congress. Even as Congress maintains the power to govern the territories, unilaterally. From a human rights perspective, the US has fallen far short of its commitment to self-determination, decolonization, and indigenous rights,” Weare said.

Weare added that the resolution is an important step towards turning the page on the Insular Cases and the colonial framework they established.