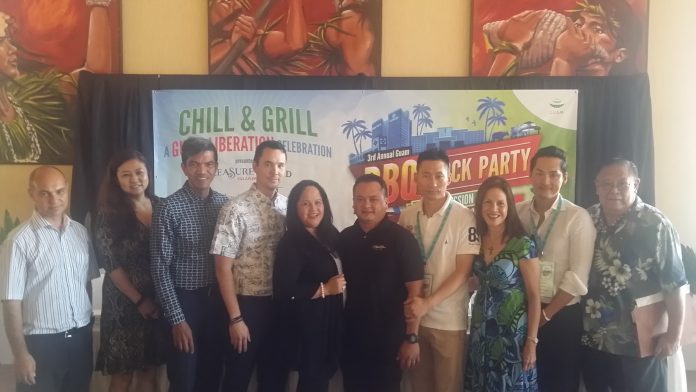 The show must go on; come rain or come shine. Tropical Storm Chan-Hom delayed outdoor activity for the original 4th of July BBQ Block Party plans. Rather than cancelling the annual event, GVB postponed the festivities until July 18th. This morning, Guam Visitors Bureau launched a press conference at the Outrigger hotel to kick-start the excitement and announce the event to the community and media.

Nathan Denight, General Manager of Guam Visitors Bureau, told PNC that the postponement worked out perfectly as this weekend is bringing international coverage from Russia, Taiwan, China, Hong Kong, Japan, and Korea for the 2016 Visit Guam Expo.  The expo occurs the morning before the event and, as a result, the visiting international media representatives will also feature news coverage of the BBQ Block Party.

The Micronesian Chefs’ Association partnered with GVB to highlight a BBQ competition between local and international teams, with over $4,000 in prizes.  Competitors will be challenged in the categories of chicken, pork, and beef.  Free samples will be available, but delicious BBQ from the competitors can also be purchased at the block party. Åsu Smokehouse (2014 Champion Grill Masters) will be defending their title against the following teams for the 2015 Grill Masters Champion title: Guam Barbeque Company, Team Meskla, Outrigger Guam Beach Resort, Chef Paul Kerner, the Pacific Islands Club Clashers, Team SeaGrill, Team Hyatt and visiting Korean Chef, Jong-ho Jang and celebrity “Sous Chef” Seung-nam Kwak leading Team Korea.

International Chef of 21 years, Jong-Ho Jang, from Korea has traveled out of his native country for the first time on this visit to Guam. He will be competing amongst locals and is joined by Korean celebrity actor and singer, Seung-Nam Gwak who came to Guam to support and enjoy the event.  Gwak filmed a music video while here and says that he loves Guam and plans to stay not only for the BBQ Block Party but also for the Liberation Day Parade.  When PNC asked Chef Jang about his anticipation as a competitor he replied, “As a representative of Korea, I look forward to showcasing and allowing others to taste a special Korean barbecue dish.  This is such a big event and I can’t wait to have fun enjoying the atmosphere.”

Co-Owner ASU Smokehouse, Buddy Orsini, shared that as a competitor he respects his fellow chefs and can’t wait to see the different techniques that will be showcased.

GVB looks forward to continuing the growth of their signature event as it brings opportunity for Guam to further promote cultural ties and potentially allow locals to showcase Guam in future international competitions.

There will be road closures at San Vitores Road in Tumon, from the crosswalk between UnderWater World and T-Galleria by DFS, to the traffic light in front of the entrance to SandCastle.  In order to ensure the safety of all participants, the closures will occur on Saturday, July 18, 2015 at 10:00 a.m. until Sunday, July 19, 2015 at 3:00 a.m.