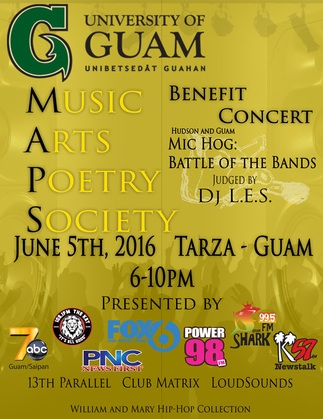 The Mic Hog concert will be held on June 5 at the Tarza Waterpark in Tumon.

Guam – If you’re a musician or hip hop artist and are looking for a venue to showcase your talent, there is an upcoming Mic Hog contest going down next month.

Proceeds from the event will then benefit Guam’s first MAPS or Music, Art, Poetry, Society Collection.

It’s the first for Guam, but ironically it started here. Former Power 98 DJ Chris Santos began doing mic hog contests about 10 years ago on Power 98. When he moved off-island, he brought the mic hog contests to the William and Mary College in Williamsburg, Virginia, establishing an archive there of musical artists.

Anyone interested in competing in the mic hog contest can simply send a copy of their song, music or rap to hsient.com. Visitors to the website will then have a chance to listen to their music and vote for their favorite artist.

“They press play, whoever likes their song, the most votes for them, you can vote as many times as you want once a day and the top four vote getters, the final four will perform live and selected, one of the four will be selected to be the mic hog champion,” says Santos.

The contest will be held at the Tarza Waterpark on Sunday, June 5. The winner will walk away with some prizes. Project Coordinator Garth Golding says it will also bring some exposure to some local talent.

“This is a really great opportunity for Guam artists to kind of shine because it’s one of the things that this does is put them on, hsi website a lot of different artists go there and producer, to kind of show themselves to the public,” says Golding.

Garth Golding says having an archive of local artists will also expose them to some bigger names in the music industry.

“The reason why, perfect example, when I brought Ashanti here, she needed like a backup singer. It’s good to have an archive of different artists on the island. If her artist doesn’t come or something happens, boom, oh I know a local artist that can assist,” explains Golding.

“A lot of artists create work and then they have no place to store it. It ends up in their nana’s bedroom with a tarp over it. It stays there for 50 years. We wanna be able to house that so for scholars and the public to come and look at it and observe it and study it,” says Santos.

“The mic hog right now is just a concert to support and fundraise for this project,” he adds.

The MAPS collection will be established at the University of Guam in partnership with the William and Mary College.