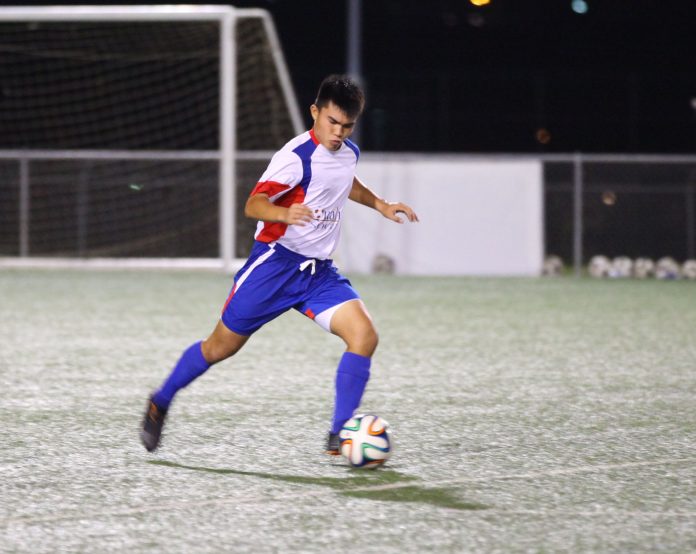 “I was inspired by my coaches and by players on the Matao squad,”

HARMON – Perseverance with a positive attitude paid off for Guam’s Jared Pangindian in realizing one of his life’s goals – playing collegiate soccer.

After taking advantage of several opportunities at Guam Football Association, including partaking in training sessions with the Matao, Guam men’s national team training squad, Pangindian impressed Menlo College head coach Eric Bucchere at the college’s ID Summer Camp in 2014, and was offered a spot on the team.

“I realized that I wanted to become a collegiate soccer player when I was a freshman in high school,” said Pangindian, a 2014 graduate of Father Duenas Memorial School. “I had been lectured about the importance of college and how these years in my life can affect my entire future, thus, with my undying love for the sport, I had decided that my soccer career wasn’t going to end when high school ended. I wanted to take it to the next level.

“I was inspired by my coaches and by players on the Matao squad,” added Pangindian, a Psychology major.

Pangindian made his debut for the Oaks against Dominican University last month in a spring training match at Menlo College’s Wunderlich Field in Atherton, Calif. after redshirting in the fall of 2014.

“Playing in that match was definitely an eye-opening experience compared to playing in Guam,” Pangindian said. “The atmosphere was very different – the thought of me being the first in my family to play a collegiate sport gave me a lot of adrenaline, plus, I was playing with teammates from the U.S., Mexico, and Guatemala, and other countries – all with different playing styles. Playing with teammates from around the world is very new to me and allowed me to learn more about the game in terms of technique and work rate. The pace, quality, and discipline is on a whole new level for me.”

The Oaks play in the California Pacific Conference in the NAIA, finishing the 2014-2015 season with a 10-7-2 overall record and 9-3 in play against conference teams. The team outscored their opponents 63-25 and averaged 3.3 goals per game, compared to 1.3 for opposing teams against them, according to the team’s Web site.

“Jared is a hard-working young man who’s driven to improve on the field and in the classroom,” said Bucchere, third-year head coach of the Oaks’ soccer team, via E-mail. “He’s humble and positive, and always willing to give his best for the team. As Jared continues to develop his technique and gains collegiate soccer experience, he will be a valuable and versatile asset to the program.”

Pangindian started playing soccer when he was 10 years old, first playing for Community First Dededo Soccer Club for two years. He next played for the ASC Trust Islanders through to the U17 division, cultivating a love for the sport that also led him to play in Division II of the Budweiser Soccer League with Coffee Beanery United FC Vipers and next, the premier division of the league with former champions Quality Distributors FC for two seasons as a teenager before heading to Menlo College last year.

Pangindian also played for the Father Duenas Memorial School Friars in the IIAAG Boys High School Soccer League and was named to the All-Island Second Team his senior year. In middle school, he played for the St. Paul Christian School Warriors.

Internationally, Pangindian has represented Guam with various youth national teams beginning at the U13 level. He has made it one of his goals to work hard enough to be noticed and called up to the Matao and play for Guam internationally at the senior level. He also aims to play soccer professionally after graduating from college.

“I would like to thank my Mom and Dad, Rhonda and James, and my sister Rhia for their love and support; without them, I wouldn’t have made it this far,” Pangindian said. “Also, I would like to thank and my aunt and uncle Vanessa and Jason, and my cousins Aubi and Evan, too, for their love and support, as well as Jean and Joseph Cepeda for bringing me into their soccer family since Day One.

“Additionally, I would like to thank GFA President Richard Lai, Matao head coach Gary White, and the GFA for all the opportunities I’ve been afforded in Guam. I’d also like to thank coaches Yamamoto, Sam San Gil, Dominic Gadia, Jason Cunliffe, Jonahan Romero, Ian Mariano, Joseph Laanan and Brett Maluwelmeng for coaching me over the years and teaching me more and more about the beautiful game of football.”

Aside from playing the sport, Pangindian also officiated matches while in Guam, appointed as high as an assistant referee for the premier division of the BSL. In the spring of 2014, Pangindian was one of two named as best overall referees of the Triple J Auto Group Robbie Webber Youth Soccer League, as well as the referee with most potential distinction.

Pangindian is listed as wearing the No. 6 jersey in Menlo College’s 25-man roster. More information on Menlo College’s men’s soccer team can be found online at http://www.menloathletics.com/sport/17/7.php