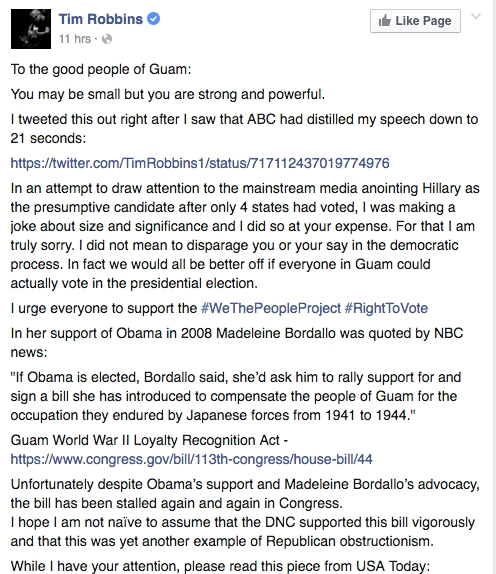 on Robbins comments, Congresswoman Madeline Bordallo says, “I am disappointed by remarks made today by Tim Robbins at a campaign rally for senator Bernie Sanders that used the inability of Guam to vote for president as a political punch line,”

Guam – Guam has received national attention on its political status this past week.

At a rally for democratic presidential hopeful Bernie Sanders, actor Tim Robbins compared Hilary Clinton’s win in South Carolina to a win in Guam intimating that Guam’s vote is without worth.

Congresswoman Madeline Bordallo was not happy with the joke. She said in a statement “I am disappointed by remarks made today by Tim Robbins at a campaign rally for senator Bernie Sanders that used the inability of Guam to vote for president as a political punch line.”

Guam raised attorney Neil Weare, president of the WeThePeopleProject, an organization that is fighting for Guam’s equal voting rights,” tweeted at Tim Robbins calling for an apology, to which Robbins tweeted back saying a “sorry” was forthcoming.

Earlier today, Tim Robbins issued an apology to Guam through social media. Robbins said, “in an attempt to draw attention to the mainstream media anointing Hillary as the presumptive candidate after only 4 states had voted, I was making a joke about size and significance and I did so at your expense. For that I am truly sorry.”

A complete 360 from his rally speech, Robbins encouraged people to visit WeThe PeopleProject and stand up for Guam’s right to vote for U.S. President.

While discussion on Guam’s equal voting rights raged on a national level, back on Guam the commission on decolonization voted to approve an education plan. The plan will aggressively educate Guam residents on all of the islands political status options while the possibility of a plebiscite vote in either 2016 or beyond looms overhead.