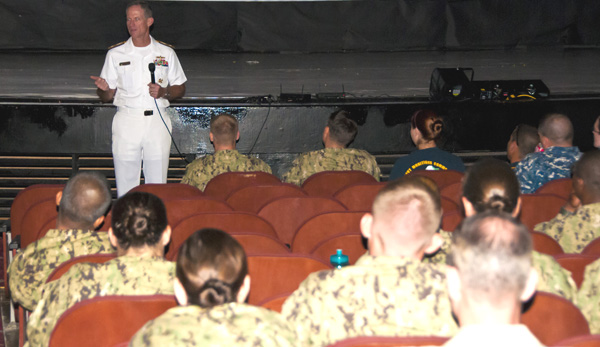 Guam – Guam Sailors from a number of commands discussed issues such as alcohol abuse and sexual assault during a Coalition of Sailors Against Destructive Decisions (CSADD) Rally at The Big Screen theater on U.S. Naval Base Guam April 25.

Rear Adm. Tilghman Payne, Commander, Joint Region Marianas (JRM) offered a few remarks during the event, encouraging Sailors to make better decisions and actions for themselves and promote them for each other.

“An organization like CSADD can help a lot and I’ve seen it work,” he said. “I’ve seen it make a difference. I applaud all of you for being here today and hopefully we will build this coalition and it will provide the kind of support that our service members need.”

“The concept is shipmates helping shipmates,” he said. “Last year the CSADD chapters throughout the Navy, throughout the world, they started to do these rallies to bring more people, to impact more people than the average group.”

Sailors participated in a Harlem Shake competition, attended awareness presentations about sexual assault and alcohol abuse and ended the event with a Gangnam-Style dance off.

For more information about CSADD, visit http://www.public.navy.mil/bupers-npc/support/CSADD/Pages/default2.aspx and the CSADD Facebook page, https://www.facebook.com/pages/Coalition-of-Sailors-Against-Destructive-Decisions-CSADD/299642495316