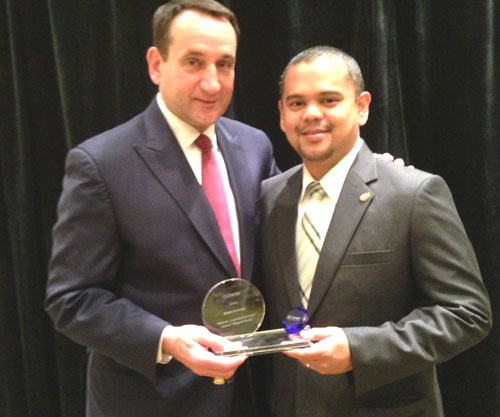 Rodriguez was presented with the 2014 Exemplary Leadership by an Elected Official award at the annual meeting of C-Change in Raleigh, North Carolina, this past Friday.  This award is given for leadership in promoting and advocating for Comprehensive Cancer Control (CCC) efforts.

“The award and honor I received today is all for the people of Guam, especially to the hard working and dedicated members of the Guam Comprehensive Cancer Control Coalition, NCD Consortium, and all stakeholders who have been the change agents in our community.” Rodriguez stated after the awards ceremony.

“The members of the coalition and consortium inspire me to work hard everyday to contribute to the fight against cancer and the many non-communicable diseases that are affecting our people,” he added.

Rodriguez, who is in his second term in the Guam legislature, said the annual meeting of C-Change included valuable discussions and the latest information on successful evidence based approaches to addressing cancer.

Rodriguez was nominated by the Guam Comprehensive Cancer Control (GCCC) Coalition for his advocacy and promotion of comprehensive cancer control efforts locally.

Also accepting the award for the 2014 C-Change Comprehensive Cancer Control Pacific Island Jurisdiction Coalition Impact Award was Renee Veksler, MA, Health Educator III at the Guam Memorial Hospital on behalf of the Guam Comprehensive Cancer Control Coalition.  The GCCC Coalition was recognized for successfully achieving evidenced based and measurable impacts in projects and/or interventions consistent with priorities in their CCC plan.

Also attending the C-Change Annual Meeting was Guam Medical Society (GMS) President and Secretary/Treasurer of the Cancer Council of the Pacific Islands Dr. John Ray Taitano, MD, MSS,FACP.  Dr. Taitano was an active participant of the meeting and contributed important ideas and perspectives.

“Most of these diseases are preventable, we need to focus and be steadfast in our efforts to protect our community’s health.  I pledge my continued commitment to the fight and will take back home with me the valuable discussions, information, and evidence based successes from this annual meeting of C-Change.” Rodriguez concluded. 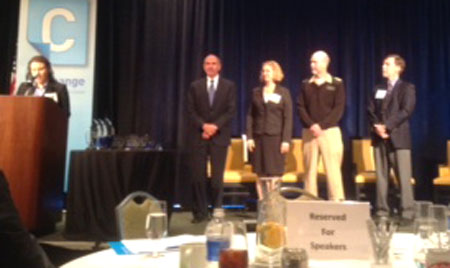 Founded in 1998, C-Change is the only organization in the country that assembles key cancer leaders from the three sectors: private, public, and not-for-profit, and from across the cancer continuum — prevention, early detection, treatment and quality of life. The C-Change mission is to eliminate cancer as a major public health problem at the earliest possible time by leveraging the expertise and resources of our unique multi-sector membership.

C-Change’s approach is to look at cancer, the disease most feared by Americans, as a societal burden, which we all bear the responsibility for addressing, individually and collectively.