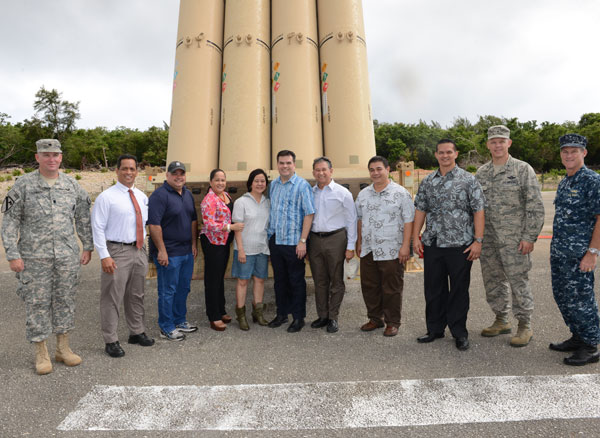 Andersen Air Force base, Yigo, Guam –  Senators of the 32nd Guam Legislature were provided a tour and brief of the Terminal High-Altitude Area Defense (THAAD) battery located on Andersen Air Force Base TODAY, May 7.

“As we continue to foster positive relations with our regional partners, it is important that we provide opportunities for Guam’s leaders to better understand the military’s mission,” Payne said. “We appreciate the senators’ support and willingness to familiarize themselves with our capabilities and to become acquainted with the men and women who serve our great nation.”

Sen. Respicio stated, “With the deployment of this missile defense system, our armed forces have once again demonstrated their professionalism and dedication to securing our island’s defense and our nation’s security.”

Legislative Secretary Tina Muna Barnes stated further, “It was a very impressive and informative tour and I know I speak for all my colleagues in conveying our gratitude to Admiral Payne and his command for keeping us apprised of this new addition to our island’s security.”

“Eggs n’ Things” is a Hawaii based restaurant chain. Their Guam restaurant is located on Pale San Vitores Road in Tumon. Employees traditionally greet customers with the Hawaiian greeting, “Aloha”.

However Senator McCreadie says he has “received multiple requests from local residents to reach out to “Eggs n’ Things” to ask them to use the traditional Chamorro greetings like Hafa Adai … in addition to traditional Hawaiian greetings.