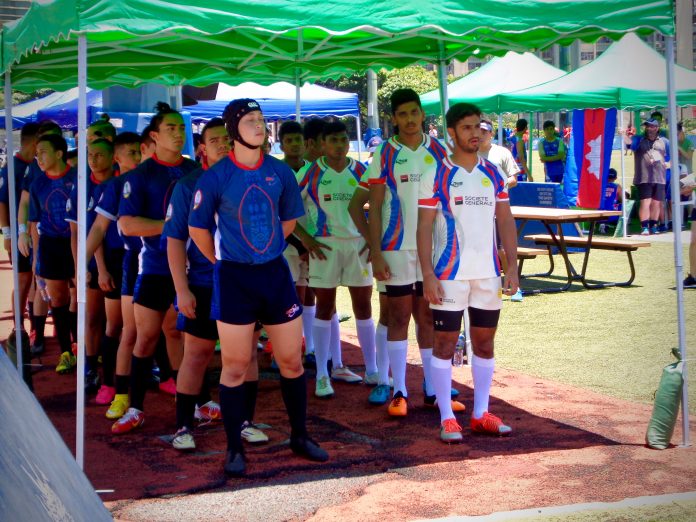 HONG KONG – After a hesitant first half where the only score was a  Guam try to Joshua Lujan, Guam exploded in the second half behind the strong running of Art Nedlic and Tonu San Nicholas .   The highlight of the half came earl y when Jaythaniel  Cruz collected an India n   attacking kick on his own goal line, jink ed his  way up field before linking up with Art Nedlic.  Nedlic added more yards before offloading to Joaquin Mesa to finish the  glorious movement with a try under the posts .

San Nicholas scored a try following an aggressive 30 met e r drive and  Cruz put the icing on the cake with a late try. Thomas  Untalan converted two of Guam’s tries. The final score was a resounding 24-0 win. Guam next faced defending champions Hong Kong and were beaten 50-0 by a skillful and well drilled team. That being said, Guam made many good moves with strong runs by San Nicholas and Nedlic and put on some strong hits.  The boys retired to their tent to contemplate the step up that is required at this level of rugby.

Guam’s third and last game of the day was against Singapore. Coach Claros changed the starting line but a couple of defensive lapses let Singapore get up by 14-0 at the half.  Claros took the opportunity of the break to  settle the players and reinforce the patterns we were playing.  This talk had immediate effect with Tonu San Nicholas driving over for a try which was converted by Jeremy Chargualaf.  At this stage the match could have gone either way. Unfortunately, Singapore took their chances late in the game and scoring two tries to take the game 28-7.

Coach Claros was pleased that the team had stepped up and represented Guam well.  He reminded them that there is a Day 2 to come and that the result of their final pool match against China would determine how we progressed.