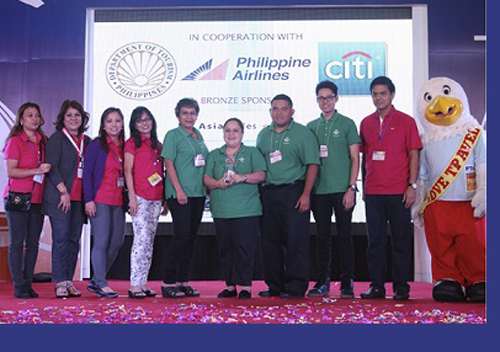 TUMON, Guam – The Guam Visitors Bureau (GVB) represented Guam at the biggest and most anticipated travel show in the Philippines.

The 21st Philippine Travel Agencies Association (PTAA) Travel Tour Expo was held on February 14 -16, 2014 at the SMX Convention Center in Pasay City. The expo was opened by Philippine President Benigno Aquino III, who signaled for the growth of the Filipino economy and demand for overseas travel. Over 200 airlines, cruise liners, travel agencies, hotels and tour companies participated in this year’s event. The show was well attended by over 80,000 travelers looking for affordable destination packages.

“The travel expo was a great success in showcasing our beautiful island,” said GVB Acting General Manager Nathan Denight. “While we highlighted Guam’s rich culture, flavorful cuisine and captivating beaches, we played up how our duty free shopping is actually more affordable than the Philippines.”

Denight led a small team of GVB officials consisting of Marketing Officer II Gina Kono, Marketing Officer I Haven Torres and GVB Philippine representatives on this 3 day event. They aimed to further promote shopping in Guam and group travel for professionals and entrepreneurs.

Guests that visited the GVB booth were treated to a colorful and lively show by Guam’s Chamorro cultural dancers, who also performed a couple of live performances on the travel expo’s main stage.

The Guam team also promoted GVB’s signature events such as the Guam International Marathon on April 13, 2014 and Guam Micronesia Island Fair on April 25-27, 2014. They also expanded on the upcoming Shop Guam Festival in November 2014 and the next Festival of the Pacific Arts (FESTPAC) that Guam will be hosting from May 22-June 4, 2016.

Additionally, GVB attended a United Airlines Agent Seminar with over 80 travel agents and met with Philippine Airlines and the U.S. Embassy to facilitate more visitors from the Philippines to Guam.