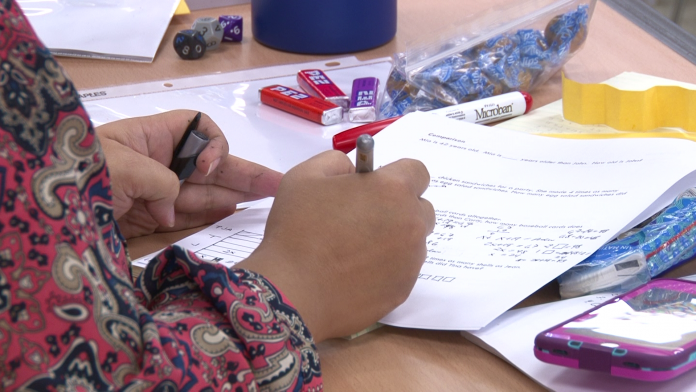 With standardized test scores for American students faltering educators have been clamoring for a solution. GDOE feels they have found something that can help turn things around. It’s known as Singapore Math, the curriculum used by K-12 teachers in Singapore where math scores for students has consistently been at the top, and it could be coming to Guam classrooms.

Every year, 4th grade and 8th grade students around the world take the Trends in International Mathematics and Science Study, or TIMSS exam. Participating in an international assessment of students math, science and reading ability. This standardized testing reveals something that may be alarming to some, the United States is falling behind in math aptitude. As indicated with recent test results where students from the US in 4th and 8th grade ranked 9th and 11th in the world respectively.

“As you know the Guam Department of Education, we still struggle with our math scores. We’ve been working on this for the last 2 years. It’s a math strategy that the Math Champions use to help us teach in a different style. The Singapore math style, it’s more visual. The teachers love it and the principles love it too. Some of the principles have called already and they have notified us that they will use it and they have started incorporating it into the curriculum,” said Dr. Leah Beth Naholowaa, GDOE project director college pathway program

With the realization of the our falling math scores came another discovery, Singapore is trending in the opposite direction. The most recent TIMSS exam has Singaporean students ranked #1. To be the best you have to learn from the best, so for GDOE the next step was clear. In partnership with Math Champions GDOE is holding a workshop which is aimed at providing elementary and middle school teachers in-depth training in Singapore math content and teaching strategies.

“It’s been around since the 1980’s. Singapore has been scoring international tests in the top 1 or 2 since then. There’s 20 years of data that shows that what Singapore is doing is working as far as educating students in mathematics,” said Beth Curran, lead trainer and instructional coach for Math Champions.

Since February of 2012, Guam has adopted the Common Core State Standards Curriculum. GDOE is joined in the adoption of these standards by another 41 states, the District of Colombia, and the Department of Defense Education Activity. According to http://www.corestandards.org, the official web-page of the common core standards, the common core curriculum was aimed at combining, what educators nation-wide identified as, information that should be learned from kindergarten through high school and what students were expected to know upon graduating high school.

However the new standards and approach to conveying those standards have not been adopted sans-resistance. Parents and educators a like have taken to whatever outlet that will hear them out to ask the layered and complex question that can be summed up in three letters and a punctuation, Why? It even famously made it to the big screen as Mr. Incredible from Disney’s The Incredibles 2 asked, “Math is MATH, why would they change Math?”

“With the shift in the 21st century we need students to be developing better problem solving skills,” Curran added.