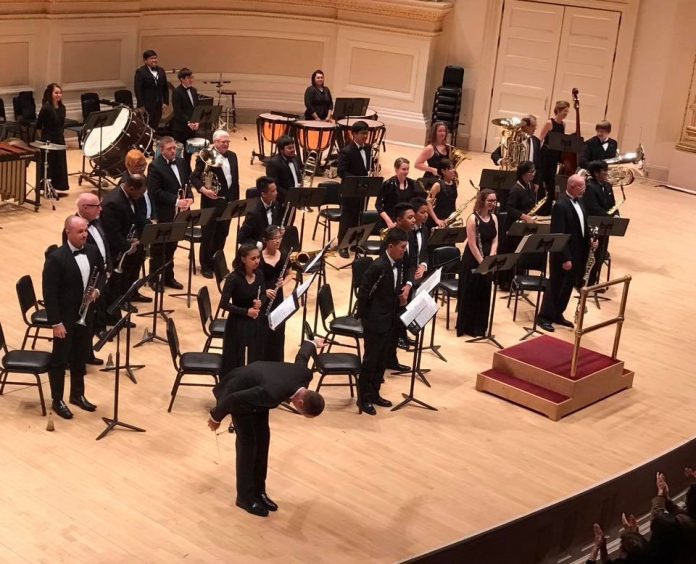 The official band of Guam has brought back a gold award after an adjudicated performance at Carnegie Hall in New York.

This is the third time GTB has performed at the festival. The first time was in 2007 where the group won silver, and then in 2012 as showcase performers, both times under the direction of Chief Bandmaster, Max Ronquillo, Jr.  This year marks the first time the band participated in the festival under the baton of Director Brandon Aydlett.

The band was the smallest group to perform at the festival, but according to GTB Public Information Officer Landon Aydlett, the band left the best impression with its big sound and energy. “The goal for every musician is to someday perform at Carnegie Hall, to be on that prestigious stage in the United States. It’s been around for well over a century. All musicians know of Carnegie Hall. And the long-time joke is, ‘How do you get to Carnegie Hall?’ The answer is ‘practice,’” Aydlett told PNC. “We had a lot of diligent efforts this year. This is our first time performing at Carnegie Hall with a new band director, Brandon Aydlett… We were the final band to perform that night on Friday evening, and we had a slam dunk, in my opinion. We ended our portion with Star Trek, and it’s an audience favorite. And so, we like to end all of our shows on a high note, especially with something that’s familiar to the public.”

Something notable Aydlett pointed out was the impressive level of camaraderie the band displayed, especially when they performed in Elizabeth City, NC. “People are usually sectionalized by their instrument sections, but the thing I like about the Guam Territorial Band, as a member, is that we all get along,” Aydlett shared. “The people in North Carolina picked up on that because we, as a band, even though we’re small, were very diverse, not only in our cultures, in our race, but also in our ages. But we, as a collective organization, have fun together… And that helps us, as an organization, to perform at our top levels.”