Governor Calvo confirmed that Guam will be the official host country for this year’s World Health Organization summit for the western pacific region of the world.

The World Health Organization [W.H,O.] is the directing and coordinating authority on international health within the United Nation’s system.  Almost two years ago, Director Of Public Health, Jim Gillan spoke with a W.H.O. representative about the idea of possibly considering guam as the host of the next western pacific world summit.  after consideration from the W.H.O. and a supportive approval from governor calvo, the W.H.O. has accepted the administration’s offer.

This October, health ministers from nations as varied as Mongolia, China, Japan, Korea, Australia, New Zealand, also to far eastern islands near South America will meet to discuss issues related to world health on communicable and non-communicable issues.  In addition to the discussion, there will be a chance for Guam to speak as a leading voice on particular topics that appeal to island communities in terms of NTD’s (neglected tropical diseases).

He says the administration will be working hard to prepare for the summit and is excited for Guam to be seen as an international meeting ground for future events.

The Governor expresses his excitement mentioning, “This is another niche for tourism. There is going to be 300 to 400 people visiting from the Asia Pacific islands as well as Australia and New Zealand; and an opportunity for our people to roll out the welcome mat and show the true island hospitality.”

Governor Calvo affirmed, “This has been a very busy year; and a busy next year. Guam is in a special place in a very special time. We are an American territory but we are in the Asian pacific region. This world health organization summit is just one of  many other activities that will be held on this island in the coming months and years ahead; that bring together so many people, so many different nations, coming together discussing issues of so much importance to the region and the world.  I’m looking forward to pushing for Guam to be the meeting place for the east, the west, and everything in between.”

The Federal government has committed to assist Guam with an estimated budget of $300,000  to host the W.H.O. summit. There is no confirmed venue as of now but they are working on securing the venues and will follow up with details when confirmed. 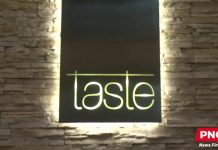