Guam – The Matao, Guam men’s national football team, will play against Myanmar and India for the first time when the team dons its player kits and cleats for the AFC Challenge Cup qualifiers set for the first week of March.

Guam has been placed in Group A of the Challenge Cup qualifiers following the tournament draw Tuesday at the Asian Football Confederation House in Malaysia. Group A matches will be held in Myanmar on March 2, 4 and 6, according to the AFC Web site.

Guam is one of 20 AFC member nations vying for a spot in the AFC Challenge Cup finals, which will be played in the Maldives in 2014. Only the winner from each of the five groups, as well as the two best second-placed teams from the pool of 20, will qualify for the biannual Challenge Cup finals.

[The starting eleven players from the Matao get into a team huddle prior to the opening whistle of the team’s match against DPR Korea at Mong Kok Stadium in Hong Kong Dec. 3 during the East Asian Cup Round 2 tournament]

“I think if we can secure our best players for the Challenge Cup in March, we can be a real contender to qualify,” said Matao head coach Gary White via E-mail from Japan. “We can build off the fantastic performances against Hong Kong and Chinese Taipei from the EAFF (East Asian Cup) semifinals, where we shocked the footballing world with the improvements we have made in the past year. We will be able to also pull from playing against two 2010 FIFA World Cup teams.

“(The Challenge Cup matches) will be another excellent opportunity to expose the Matao playing style, our program and our players. Believe me, the other teams now take us seriously as a competitive football nation,” added White. 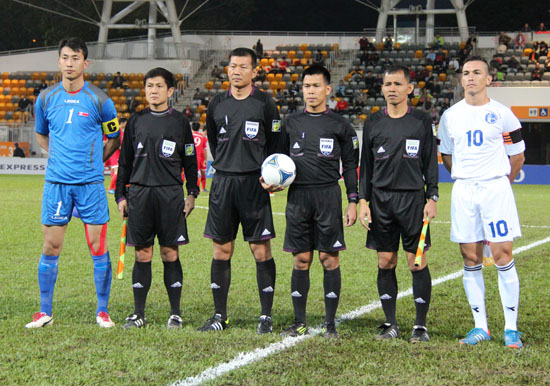 [Matao captain Jason Cunliffe (in white, No. 10), gets into a group photo with Ri Myong-Guk, captain of DPR Korea and World Cup veteran, along with the four FIFA referees before Guam’s match against DPR Korea at Mong Kok Stadium in Hong Kong Dec. 3 during the East Asian Cup Round 2 tournament]

Guam will face Myanmar and India for the first time in its football history in March next year. Myanmar currently is ranked No. 156 in the world, up 28 spots since October, the FIFA Web site states. Myanmar also is a two-time semifinalist in the AFC Challenge Cup finals. India, whose national team won the Challenge Cup in 2008, is ranked No. 169 in the world. In addition to Myanmar and India, Group A includes a familiar foe in Chinese Taipei.

In Guam’s most recent fixture with Chinese Taipei in the East Asian Cup Round 2 tournament in Hong Kong, the Matao’s opponents needed stoppage time to pull together a goal to salvage a draw.

Group B is composed of Kyrgyzstan, Tajikistan, Pakistan and Macau and will play in Kyrgyzstan March 17, 19 and 21. Laos will play host to Afghanistan, Sri Lanka and Mongolia in Group C. Nepal will play host to Palestine, Bangladesh and first-timers Northern Mariana Islands in Group D. The final group, Group E, will be played in the Philippines. The Azkals will see competition against Turkmenistan, Cambodia and Brunei, according to the AFC Web site.