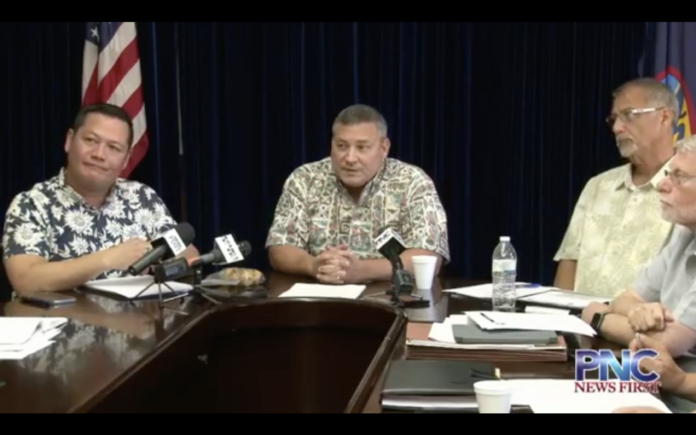 Guam – Standard and Poors has placed all of GovGuam’s General Obligation and Lease Bond ratings on a credit watch with negative implications.

That watch is directly related to the $67 million budget shortfall resulting from the Trump Tax Cuts.

Guam Economic Development Authority Administrator Jay Rojas says this doesn’t mean our credit rating has changed. Rather, it means S&P is using a stronger magnifying glass when looking at how GovGuam is able to solve its current fiscal crisis.

While it doesn’t affect the bonds that have already been sold, Rojas says it could affect other bonds.

“It is affecting our general obligation bonds that are outstanding from 1997 as well as the certificates of participation which in essence are the leaseholds on the schools that we have had built. So JFK, Tiyan, Okkodo, Astumbo, Liguan and Adacao,” said Rojas during a press conference Adelup held today.

Rojas adds that some rating agencies such as S&P and Moody do link to the other revenue bonds that are out there.

“So as we are going to be going out for financing for the Guam Port Authority, should we not have a solution soon, it is going to affect the interest rate and the credit rating that we would be looking at for the Port Authority of Guam,” Rojas explained.

As it happens, Rojas says rating agencies, bond holders and investors keep an eye on what’s happening on Guam and track the island’s movements on a daily basis. He knows this because GEDA fields those inquiries.

“And this report has actually come about because they did ask us some questions about what’s going on with the finances, what are the serious implications with the cash, when are we looking at the actual fiscal realignment projects the governor has proposed,” noted Rojas.

So now GovGuam is in a negative credit watch for the next 90 days. Rojas says a change in status could happen any time before then. After a watch status, GovGuam’s rating would either be upgraded or downgraded.

Meantime, Bureau of Budget Management and Research Director Lester Carlson says the administration has already begun and is continuing to try to find ways to cut the budget. Agencies have already been asked if they can take a pro-rata cut in this year’s budget and they came back with their replies.

“So the University said yes. The office of the Attorney General said yes. The Guam Community College said yes. We’re already making adjustments to either their allotments if they’re getting cash disbursements or if there’s allotment control at BBMR, we’re already putting those monies in reserve and they can’t touch it,” Carlson shared.

Carlson says they’ve cut about $30 million already in this fiscal year but that doesn’t come close to the $67 million shortfall. And even then, he says that would be to fund bare bones, essential government operations.

Governor Calvo meantime adds that he’s looking for other options to help them bridge that $37 million gap.

“I’m probably going to be sending some legislation over the next day or two to shorten the furlough process. When I look at this whole thing to go 30 days to go 90 days, that’s like giving a three hour notice on the sinking of the Titanic and we’ve got 30 minutes left,” said the governor.

Calvo says he’s serious about trying to find a solution as soon as possible. In fact, he says he already has his signing pen ready for whatever the legislature sends his way.