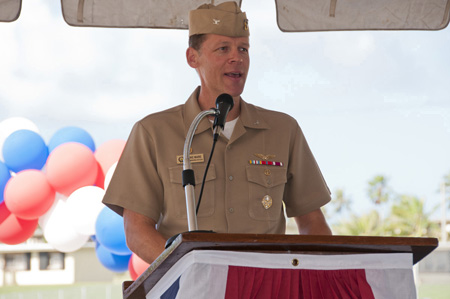 ANDERSEN AIR FORCE BASE, Guam – The aroma of traditional holiday food and a rumble of voices filled the room as service members and their families waited to enjoy their Thanksgiving feast.

The Guam USO, provided a free Thanksgiving meal to service members and their families, Nov. 28, inside the Royal Orchid in Tumon, Guam.

The USO also provided a meal to Marines currently serving in Tinian preparing for Exercise Forager Fury II. The purpose of FFII is to employ and assess combat power generation and sustainment in a deployed, austere and unimproved environment.

Approximately 54 boxes of food were flown from a bakery in Saipan and taken to the Marines in Tinian for Thanksgiving.

“I am extremely thankful we have organizations like the USO who are able to provide Marines out in the field, living in tents, the opportunity to have a Thanksgiving meal together,” said Coffey.

[Leigh L. Graham speaks during a Thanksgiving meal provided to service members and their families by the Guam USO inside the Royal Orchid in Tumon, Guam, Nov. 28. The USO also provided a Thanksgiving meal to Marines currently serving in Guam in support of Forager Fury II. The purpose of FFII is to employ and assess combat power generation and sustainment in a deployed, austere and unimproved environment. Graham is the area director for USO Guam and Hawaii.]

More than 1,000 service members and their families showed up at the Royal Orchid to enjoy the food and entertainment.

“We had plenty of food and great local entertainment with so much support from the entire island,” said Leigh L. Graham, area director for USO Guam and Hawaii. “There is no greater cause in (the U.S.) than to serve and protect our rights and freedoms, and this is just a small way of saying ‘Thank You.’”

Although they are not in an ideal situation during the holiday season, service members found reasons to be thankful.

“I am thankful for good times, good people, and the USO for providing us with a great holiday meal,” said Capt. Eric Morishige, electronic counter measures officer with MAG-12.

Being away from friends and family during the holiday season can take a toll on many service members but the Thanksgiving meal helped raise their spirits.

“Thanksgiving is a wonderful time of year but it is also a time that we can be reminded of the sacrifices we make in serving our country when it calls us to be away and serving apart from the people we love,” explained Coffey. “I, like many, miss my family, but during this event we are able to lift each other up and celebrate all that we have.”