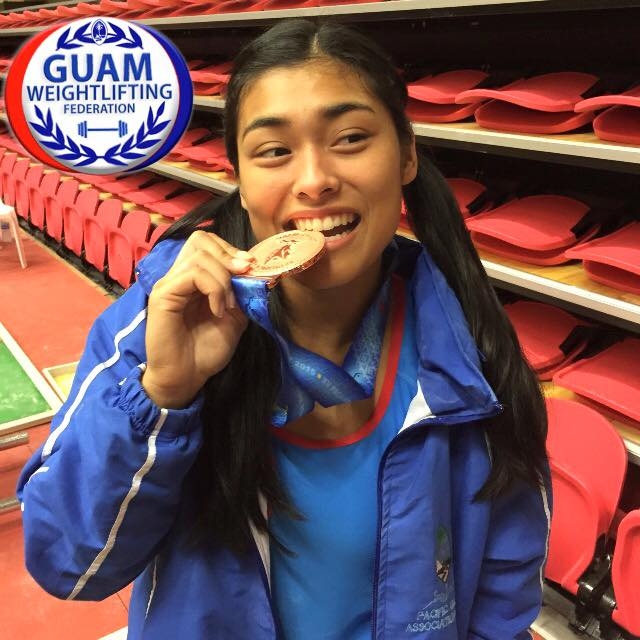 Port Moresby, Papua New Guinea – The Guam Weightlifting Federation sent 9 athletes In 8 different weight categories to the 2015 Pacific Games in Papua New Guinea. Competition was spread over the first 3 days of the Pacific Games. This was the first competition that the federation has competed in, in over 15 years.  GWF athletes had a little over 3 months to train for competition but headed out to the Pacific Games confident in their abilities to execute lifts in the Snatch and Clean and Jerk.  In weightlifting, each athlete has 3 attempts to lift as much weight as possible in both the Snatch and the Clean and Jerk.

Day one started off with sisters Kayla Taguacta (48kg) and Kimberly Taguacta (53kg).  Kayla was unable to make weight and was unable to compete. Kimberly was able to get the team off to a great start by snatching 62kg but was unable to complete a lift for the clean and jerk. Her 62kg snatch was enough for her to earn a bronze in the snatch event. This would be the second medal Guam would earn at the Pacific Games on day 1.

Day 2 was an all day event as 5 Guam weightlifters took the stage. Zach Bonanno Guam’s Junior lifter joined Krysthian Villanueva in the men’s 69kg weight class. Both lifters were able to hit a 90kg snatch but were unable to complete a lift in the clean and jerk. Krystal Madden (58kg) was able to get a total of 106kg by hitting a 45kg snatch as well as a 61kg clean and jerk.  Amy Reyes was also able to hit both lifts and ended her night with a total of 130kg. She was  able to lift 54kg for her snatch and 76kg  for her clean and jerk. To end the day, Paul Claros lifted in the men’s 77kg weight class and was also able to hit weights for both his lifts. Paul snatched 108kg and clean and jerked 130kg for a total of 238kg.

Day 3 of the Pacific Games ended with our men’s 85kg and 94kg weight class. Shane Concepcion (85kg) had an outstanding day completing 5/6 lifts for the day. He was able to snatch a personal best of 120kg at the games. He then hit a 137kg clean and jerk. He attempted another personal best at 145kg but came up unsuccessful. Brandon Holm also had a great night and was able to walk away with a 245 total, hitting 112kg on his snatch and 133kg on his clean and jerk.