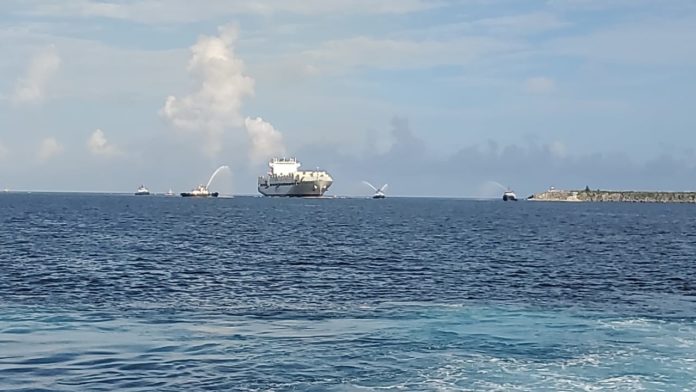 Named in honor of Hawaii’s late senior U.S. Senator, the M/V Inouye is the largest containership built in the U.S.

Lt. Governor Josh Tenorio and Port General Manager Rory Respico were among GovGuam officials that witnessed the arrival aboard the M/V Triton. 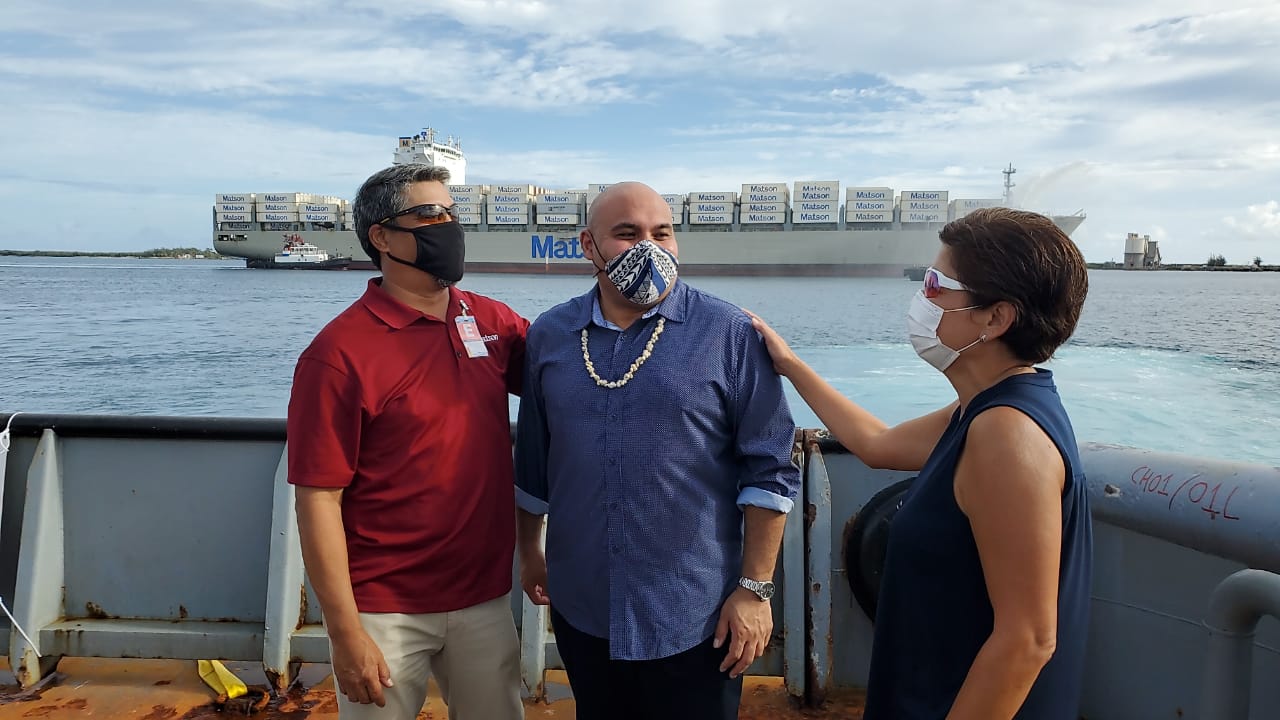 The vessel weighs in at over 51,400 metric tons. It is 850-feet long and has 3,600 TEU, twenty-foot equivalent units, which is the standard unit of measurement for container capacity.

The M/V Inouye is Matson’s largest ship and its fastest, with a top speed in excess of 23 knots.

The M/V Inouye is one of four new ships that were built for Matson.

It incorporates a number of “green ship technology” features that will help protect the environment, including a more fuel-efficient hull design, dual-fuel engines that can be adapted to use liquefied natural gas (LNG), environmentally safe double hull fuel tanks and freshwater ballast systems.

“These new ships are the future for Hawaii shipping and will bring a new level of efficiency and reliability to our service,” said Matt Cox, chairman and chief executive officer. “The substantial investment in new technology underscores Matson’s long-term commitment … and our desire to serve the Islands in the most advanced, environmentally friendly way for years to come.”

READ the release from Matson in FULL below:

GUAM, July 14, 2020 — Matson, Inc. (NYSE: MATX), a leading U.S. carrier in the Pacific, celebrated the inaugural arrival of its second Aloha Class containership, Daniel K. Inouye, to Guam with a water salute and welcome event at sea. The vessel made its inaugural arrival into the Port Authority of Guam today, less than a year after the arrival of the Kaimana Hila, the sister ship of the Daniel K. Inouye. The company announced that Daniel K. Inouye would begin servicing this island as part of Matson’s weekly scheduled service.

Daniel K. Inouye (DKI) was christened in June of 2018 and went into service in November that same year. It was the first of two state-of-the-art Aloha Class containerships and largest built in the U.S. for Matson by Philly Shipyard at a total investment of approximately $418 million for the pair. The DKI will be delivering cargo to Guam from the West Coast of the U.S. mainland and Hawaii.

“We are very pleased to add the Daniel K. Inouye into our service rotation for Guam,” said Vic Angoco, senior vice president, Pacific. “We continue to find ways to open up capacity for Guam from the U.S. mainland and Hawaii, which adds greater reliability, dependability and on-time service for the island’s residents and businesses.”

Bernie Valencia, vice president and general manager for Guam and Micronesia said, “Guam has been an important hub for Matson for close to 25 years. We will be celebrating our 25th anniversary in Guam and Micronesia in early 2021, and what better way to show our commitment than to expand and reinforce our services and support for the island as it begins its economic recovery efforts.”

The addition of the new vessels has heralded a new era in shipping in the Pacific. Matson continues to further invest in its Hawaii operation, which helps to improve the overall reliability and efficiency for customers in Guam. Matson installed three new 65 long-ton capacity gantry cranes at its Honolulu hub terminal at Sand Island. Much of the cargo destined for Guam and Micronesia from two of Matson’s U.S. mainland ports is relayed in Honolulu, and the addition of the ship-to-shore container cranes, deemed the largest in the industry, help to relay cargo more efficiently to the islands.

As part of its four-year fleet expansion plan, Matson added the Lurline, the first of two new Kanaloa Class combination container/roll-on, roll-off (“conro”) vessels, into service in Hawaii in January and christened its fourth new ship, Matsonia, days ago on July 6 in San Diego, California.

Angoco added, “We have shown through this challenging time that our customers in the region can count on Matson to deliver on-time and as scheduled. We want our customers in Guam and Micronesia to know that we continue to find ways to serve them when they need us most. Guam and Micronesia are important to Matson, and we are committed to positively contributing to improving the quality of life in the islands and supporting their future growth.”

Daniel K. Inouye was named in honor of the late Senator from Hawaii. Born in Honolulu in 1924, Daniel Inouye served with the U.S. Army’s famed 442nd Regimental Combat Team during WWII.  He returned to Hawaii a decorated war hero and practiced law before entering politics. When Hawaii was admitted to the union in 1959, the fledgling state elected Inouye as one of its first representatives to the U.S. Congress. In 1962 he was elected to the U.S. Senate and was successfully reelected nine times in an unparalleled public service career spanning 50 years. Senator Inouye was an ardent supporter of the people of Hawaii and the Pacific. He was a true champion of the U.S. Merchant Marine and is recognized throughout the maritime industry as one of its most powerful advocates.

Weighing in at over 51,400 metric tons, the 850-foot long and 3,600 TEU* capacity, sister ships Daniel K. Inouye and Kaimana Hila and are the largest containerships ever constructed in the U.S.  They are also Matson’s fastest vessels, with a top speed of nearly 24 knots, helping ensure on-time deliveries in Guam and Hawaii from Matson’s three West Coast terminals in Seattle, Oakland, and Long Beach.

Founded in 1882, Matson (NYSE: MATX) is a leading provider of ocean transportation and logistics services.  Matson provides a vital lifeline to the domestic non-contiguous economies of Hawaii, Alaska, and Guam, and to other island economies in Micronesia.