Guam – Despite a tireless defensive effort by Guam’s U14 Boys national team, DPR Korea was able to sneak in two goals to win 2-0 in the day’s final match yesterday in the 2012 AFC U14 Boys Festival of Football in China’s National Football Training Center in Beijing.

“DPR Korea was very athletic with the ball,” said John Anthony Cruz, who played right defensive back in the game. “We had to put in a lot of effort defensively to stop them from scoring and also to help bring the ball up.

[Jestin Escobar of Guam’s U14 Boys national team fights for possession of the ball against DPR Korea in a 2012 AFC U14 Boys Festival of Football match Thursday at the National Football Training Center in Beijing, China]

“We learned a lot from this game. We know we have to continue practicing crossing, pressuring high and controlling the ball better,” added Cruz, a seventh-grader at Andersen Middle School and a member of the Tumon Typhoons soccer club in the recently concluded Cars Plus Robbie Webber Youth Soccer League. 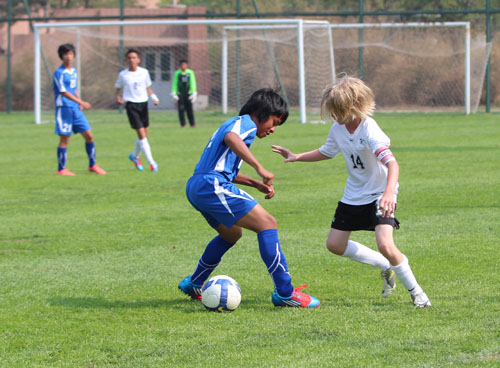 [Victor San Nicolas of Guam’s U14 Boys national team fights for possession of the ball against the Northern Mariana Islands in a 2012 AFC U14 Boys Festival of Football match Thursday at the National Football Training Center in Beijing, China]

Not finding any breathing room to cross the balls from either side of the field with Cruz and teammate Shashikant Kotwal running down the Korean forwards, the Korean team found short windows of opportunity from the center for shots. Although Guam’s defense, led by goalkeeper Jerome Artero, stopped most of their early shots, two eluded the back line for the early advantage.

The intensity continued through the game when Guam turned the tables to pressure the Korean defensive line. DPR Korea’s first scare came when Leon Bamba found open space in the right wing for a shot that, unluckily for Guam, bounced off the cross bar. Later, Jake Benito took a through pass and burned Korean defenders to get a shot that just went wide on the right side. In the final minute of the game, Jeffrey Ho headed a high pass over the goalkeeper just outside of the goal box, but a Korean defender was able to bicycle-kick the ball out and away to preserve his team’s shut out win.

With the exception of the game against Guam, NMI had a good outing on the second day of match play. NMI defeated Macau 1-0 and posted a 1-1 tie with China, P.R.