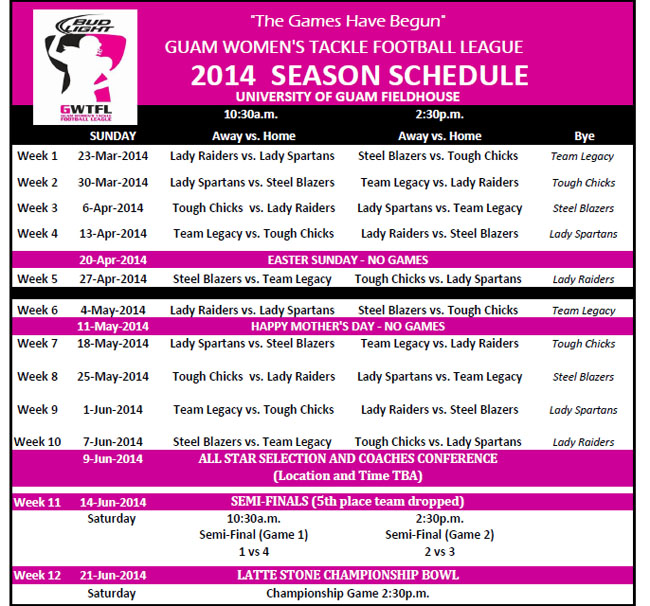 Hagåtña, Guam – The Guam Women’s Tackle Football League (GWTFL is pleased to announce the kickoff of the third annual season of full contact tackle football for women of all ages.

The Guam’s Women Tackle Football League (GWTFL), a 501(c)(3) non-profit Guam organization, is a full tackle women’s football league focused on creating a positive, safe and fun environment for the women who play the game and fans that come out to watch them. We are all about player safety, community service, and integrity in mind.

The games which will be held every Sunday at 10:30am and then again at 2:30pm at the University of Guam Field, Mangilao with the exceptions of June’s games which will be held on Saturdays starting June 7th. The regular season will commence on March 23, 2013 where these 5 teams will compete to win the 11-man championship game scheduled for June 21, 2014. There will be two goodwill games playing 8-man with Japan teams from Osaka. March 2nd, 10:00a.m. with F.F. Langulls vs. Lady Raiders and March 22nd 2:30p.m. with Blaze Cats vs. Team Legacy at Raiders Field, Tiyan. The 5 teams are Lady Raiders; Lady Spartans; Tough Chicks; Steel Blazers and Team Legacy.

“Thank you for giving me the opportunity to serve as President for the Bud Light Guam Women’s Tackle Football League (GWTFL). Your strength and generosity has given me the passion to continue to devote myself to this league and to a sport that I love” said Linda Salas, President and Founder.

Last year, we celebrated playing a full regular season with 8 complete teams with Team Legacy taking home the trophy in the championship game. We had an exhibition game with the F. F. Langulls of Osaka, community volunteer project (Adopt-A-School) at D.L. Perez Elementary school, Governor’s Council on Physical Fitness and Sports “Innovative Sports Fitness Program” recipient and taking part in the Liberation Parade. None of which could have happened without the generous contributions and support of our sponsor, Bud Light and our fans. The entire league thanks you not only for your sponsorship of our league but for supporting women’s sports on Guam.